They Give You Two Days

You get two days for your own personal use, and then they make you work five days. Seems all wrong, doesn’t it? Well, that’s the deal, like it or not. So we put our 48 hours to good use: I ran in a local 5K (I finished, let’s leave it at that) on Saturday morning, then we heard our neighbor making an infernal racket (welding torch? seriously?), so we took off for a one-night car camping trip in the coastal hills. This was the last weekend for first-come/first-served camping at Butano State Park until November, so we proceeded there with all due haste. The camp was nearly full – just a couple of walk-in sites left, so we grabbed #24. 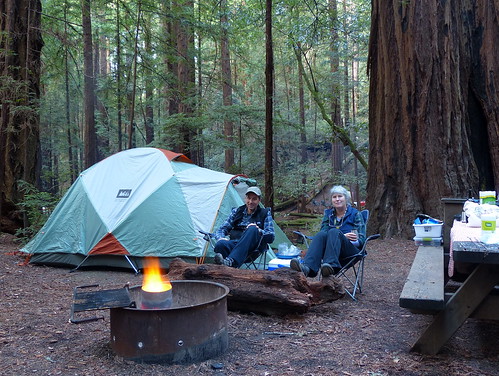 We camped in neighboring #22 last November, but I think this site’s marginally better. The tent site is very level and well-screened. But all the walk-ins are good. They’re set in a quiet little dell full of beautiful redwoods. Here we can be seen at leisure, waiting for the coals. Here’s a camping tip for you – if you start your evening fire with charcoal, you’ll have no trouble getting a good wood fire going later. The coals will even be hot enough the next morning to get a fire going nice and easy.

We are considering some refinements to our camping rig. We’re well-equipped for backpacking and for car camping, but could improve our template for walk-in camping. Most of our stuff is in the Action Packer, which is well-regarded for its black hole-capacity storage, but it’s way too heavy for the walk-in sites. And it has a lot of stuff we don’t need, so a walk-in variation will likely emerge.

Butano surprised us with more birds than usual. The forest isn’t your best birding locale, generally. But we ambled down the Six Bridges Trail and found ourselves in a hot spot. If you know where the Bat Bench is, aim for that and you’ll see birds. Along with Stellars Jay, we had the Band-tailed Pigeon, Downy Woodpecker, Wilson’s Warbler, Pacific Wren, Anna’s Hummingbird, and assorted soaring birds and unseen songsters. Here’s Resident Expert next to one of the Six Bridges, before we knew there would be birds.

The Ranger told us to be sure not to leave any crumbs, because they’re trying to discourage the presence of Ravens and Jays. There’s an endangered bird, the Marbled Murrelet, that nests in the tops of redwoods in Butano’s deepest recesses, and the trouble-making ravens and jays raid the nests. We said we’d leave no crumbs. She also said they’re trying to discourage the raiding birds by leaving fake Murrelet eggs around filled with off-putting flavors. We might have spotted one of these along the trail. 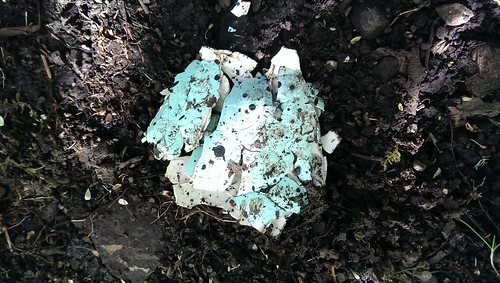 But there’s more to see than birds and broken eggs. How does this Coastal Range Newt grab you? (Figuratively.) 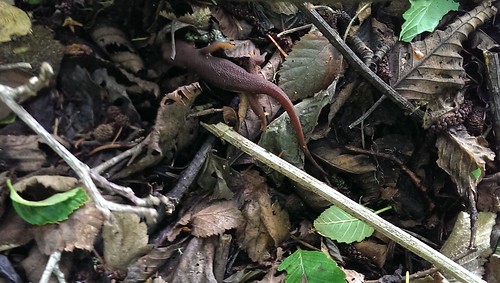 And forget about the Newt for a second: take a look at that forest floor! There’s just a lot going on down there. I am assuming there are bugs.

So we accidentally didn’t close our food box at the camp site correctly that night, and when I got up in the morning the Stellar’s Jay had gotten into the bagels. One was missing, and one was half-eaten, and there were many crumbs. We felt really bad about this, given the whole program that’s in place to remove this kind of extra food for the ravens and jays. I found out that it was a grad student at our alma mater Humboldt State that came up with the effective fake-egg gambit, so when we got back I made a donation to the HSU Biology department. I also read up on the Marbled Murrelet, and this is one amazing bird. I hope to hear one some day (seeing one is pretty unlikely).

You might think that gearing up and tearing down for just one night of camping is a lot of work, but it is so worth it. There are so many great little moments that you just don’t get if you’re only out there during the day. Hearing the camp settling in as the sun goes down, strange midnight sounds outside the tent, getting coffee and a morning fire going – that is what it’s all about.