The birding gives you a fresh look at places that you thought you knew well, such as your backyard, or the local hiking place. For us, that’s Edgewood County Park. We went up there for the zillionth time this afternoon, with hopes of seeing a bird or two. I’m getting real close to another big number in the List (200), and although we’ve seen most of the birds that Edgewood gets, you just never know. And I’m really, really close to 200, so hopes were high. And yet, tempered by the knowledge that we’re still in the summer doldrums for birds – it’s pretty much just molting, bird-feeder-hogging House Finches these days. But there’s always the possibility that some wayward migrating songbird that I haven’t seen will drop in on Edgewood, seeking food and water. It could happen. As President John F. Kennedy once said, “There’s always some son-of-a-bitch who doesn’t get the word.”.

So we arrived at Edgewood, not expecting much, but still on the lookout for that wayward fellow. And we’re not even in the park yet, and the birds are coming out of the woodwork. Chickadee, Scrub Jay, Raven, Junco, and a family of California Quail. 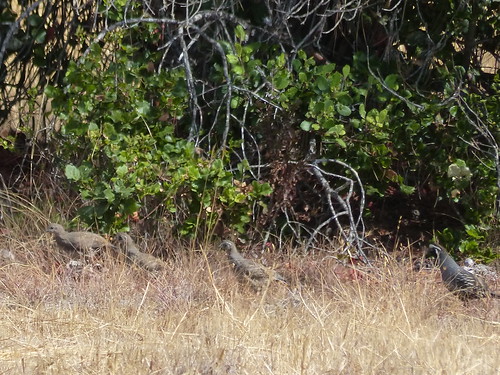 This bodes well! Not figuring on seeing much of anything, and already we’re elbowing our way through crowds of our feathered friends. So we move on, and the birds keep coming. Turkey Vulture, more Jays and Juncos, and then a small flock of Band-tailed Pigeons. If you are the kind of person who just read this and said “Pigeons! What good are those?”, let me say that once I was as you are now. To set you straight, the Band-tailed is our native Pigeon and is deserving of our respect. Here’s one for you to look at. 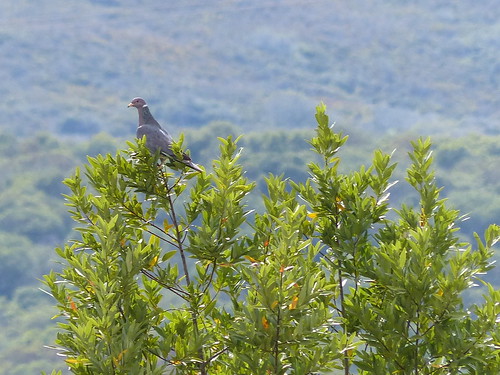 They make a cool, owlish sound. Many people mistake them for owls if they are heard and not seen. I’ll bet if you told them they were hearing pigeons, they would say, “Pigeons!”. Then you’d have to sort them out on how these are good birds and to show some respect.

So we were on a roll with the birds, and then there weren’t any. Once in a while there would be a rustle in the underbrush, or a fleeting dart across the sky, but the bird tally came to a sudden halt. But as they say, if life gives you no birds, take lizards. I noticed these super tiny lizards on the path. Here’s a picture of one – he’s about and inch and half long. 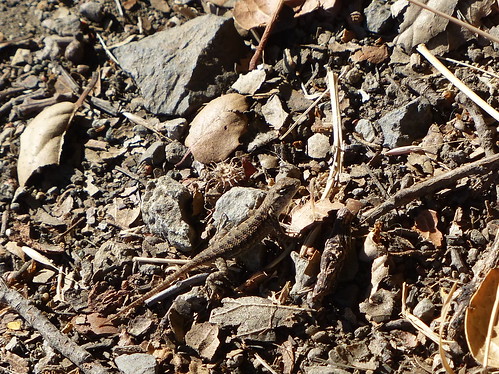 It’s our regular Coast Range Fence Lizard, but in miniature. I researched it later and learned that they hatch from eggs at this time of year. Mystery solved. The regular size lizards were also out and about. Here’s one of those, watching the day go down. 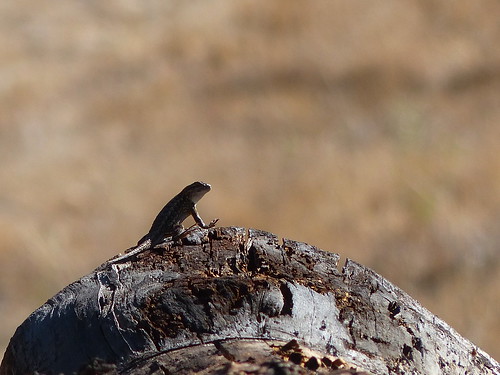 So the lizards came through for us, and we made our way out of the park. And wouldn’t you know it, here come the birds again. Tons of Jays, Juncos, and the Western Bluebird. We were looking all over for him, knowing that the bluebird is a year-round resident. This guy is either molting or has some other issue with the feathers. 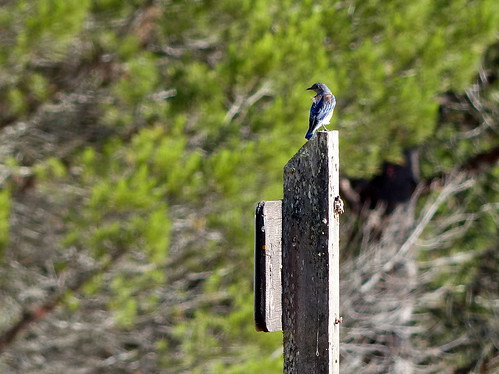 The List remains as it was: real, real close to a big number.