We day hiked out to Camp and Bear Lakes, in the Emigrant Wilderness section of the Stanislaus National Forest, on a car camping trip earlier this summer. The trails looked really doable for the low velocity, reduced distance backpacker, which is pretty much what we are. You’re starting at a fairly high elevation (8K+), but after that it’s a mostly up and down traverse across Sierra granite and open forest, interspersed with sparkling little lakes. Man, what are we day-hiking for? We should be backpacking! Here we are at Camp Lake last June, thinking exactly that. 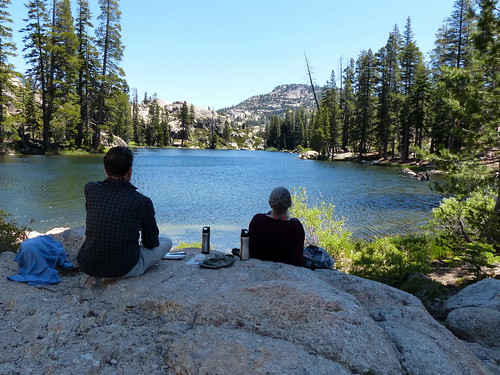 Many earth rotations later (last weekend) we made it back to the Stanislaus with our backpacks, sleeping bags, and everything. First stop was at the Summit USFS station at Pinecrest, to get our wilderness permit and the low-down on current camping conditions. We described our prior knowledge of the Camp/Bear Lakes region, and our backpacking plan. The ranger suggested we might try another trail, rather than the same one we’d already hiked. She said it in a nice way, though. Fine! I’ve always been really open to changing plans on the spur of the moment, except for during the entirety of my prior existence. But this person was wearing a uniform, so we’re now starting at a different trailhead and have a new destination. The Gianelli Trailhead, aiming for the Lakes Valley.

The road out to the trailhead is not paved, and not all that smooth, and – at least in our case – there’s a really slow minivan in front of you. It’s a well-graded, gradual ascent from the trailhead to Burst Rock, the first location of note on this trail. We’re now on an emigrant trail from the Gold Rush era, one of those that was promoted by someone as a faster route to the gold fields, but was most notable for the quantity of broken wagons and dead animals along the trail. Hence its current wilderness status. There are excellent views of the surrounding area on this section of the trail, after a mile or so. But in the less scenic areas, you might run across a family returning from a 5 day camping trip, with their belongings carried by two pack llamas, as we did. Something tells me there’s a pack llama in our future. They seemed really nice, and didn’t appear to mind having to carry everything. I’m just the opposite. There’s a guy in Sonora who rents pack llamas, if you, like me, don’t want to carry anything anymore.

Beyond the Burst Rock ridge, you descend for a short while to find a side trail to Powell Lake. Here’s a snapshot. 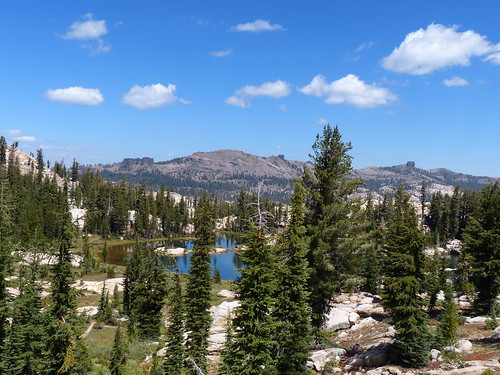 It looks very nice, they say the swimming is excellent, and you can camp here, but you’ve only gone a couple of miles at this point. Why not move on a little further? We were also concerned that the occupants of that slow-moving minivan would be aiming for this as a camping destination.

On we went, up another ridge, and then we contoured down to the Lakes Valley. Not far past the ridge top we saw a plein air painter and companion rendering the scene below. 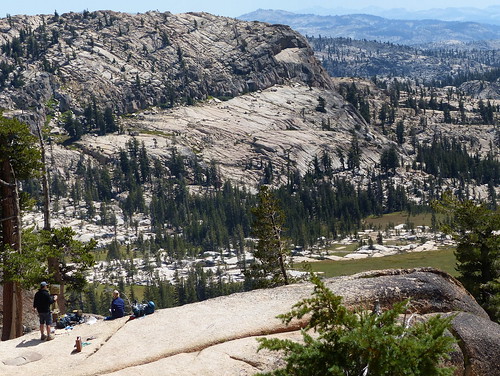 I didn’t think of it at the time, but after looking more closely at the photo I’m pretty sure this is the brother and sister painter duo of Tom and Kristen, who you might remember from the Mile… Mile and a Half JMT documentary. Out of the frame to the right is the lake area we’re aiming for on this hike.

We continue down, and encounter a hiking gentleman, who says “that’s one way to do it”, referring to my camera being attached to the top of my hiking staff. I favor the Leki Sierra staff, which offers this option, but this is the first time I’ve actually used it for that purpose. Turned out to be handy. I wasn’t sure how to carry the camera with a backpack on, and the staff provided some extra stability. He went on to advise me to use two hiking poles, use a small digital camera that attaches to a belt, and that I’d be unhappy if I dropped my hiking staff. All good information, but I like to keep the trail banter to the usual, “Beautiful day!” and “Yeah, awesome!”. But “yeah awesome” didn’t seem like the appropriate response to his unsolicited guidance, so I asked where they’d camped and he mentioned some places that I’d never heard of, and that they (his two friends had now appeared) were hiking out, even though they could stay three more days. Not sure what to say to that, so I said we were hiking down into the Lakes Valley, and he told us that there was hardly any water, but there were places to camp, “until there aren’t any”.

Yeah, awesome. We said farewell to Captain Bringdown, and continued on. The trail gets into an open forest, then levels out, where you’ll find a trail junction leading you to the lakes. The main lake has been given the name “Chewing Gum Lake”, but I will avoid using that name again. They should rename it, with the ground rules stating that the new name cannot include any cash register impulse items.

I didn’t look all that closely at the topo map for this section before the trip, and walked for a while and didn’t see any lakes, so that started to elevate concerns. Probably in other, non-unprecedented-drought years, you’d see the lakes showing up sooner. We walked through beautiful meadows and saw lots of good birds, but no lakes. No water, for that matter. Could be an issue. Maybe Captain Bringdown was right! We walked on, and eventually saw a small pool containing stagnant water. Not what I had envisioned. This can’t be it, I insisted, and we kept moving. We hadn’t taken a break since Powell Lake, and should have done so. When you’re getting tired and a bit anxious, you’re more likely to twist an ankle or something. Good thing we came upon the lake right then. 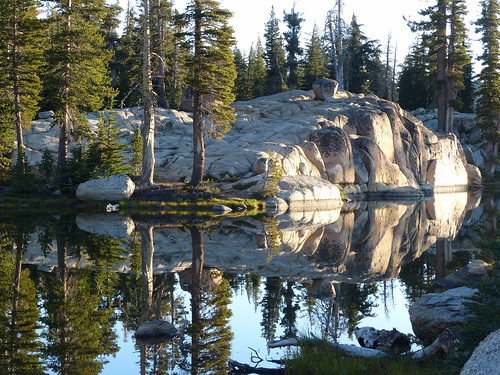 We set the packs down and I went scouting for a camp site. It looked like people had camped where we’d stopped, but this was right on the trail. I’d prefer not to be in a main traffic corridor. I found a better location on a granite platform (similar to that in the photo above), and brought the Resident Expert up there to check it out. On second viewing, its shortcomings were more apparent. Lots of sun and wind exposure up here, and it included the potential of wandering off the edge should one decide to walk around in the middle of the night, as one is wont to do. But back towards the trees there was a flat, shaded spot that was much better. Resident Expert approved. 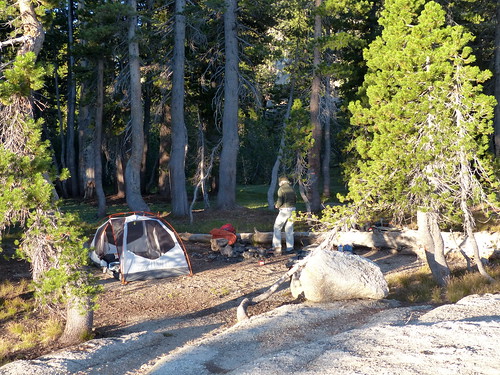 After settling in to camp, we explored the area a bit more, seeking the many lakelets hidden among the granite.  Here’s one: it had Mallards in it. 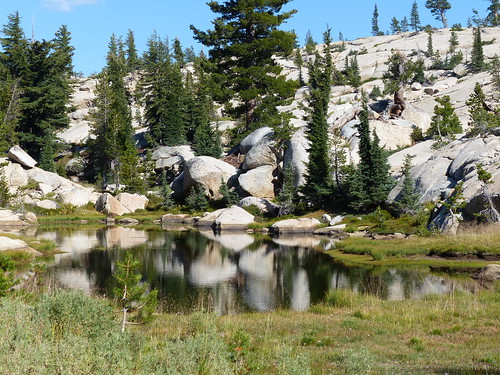 No shortage of lakes and water, amazingly. There were a few locations that looked like former lakes, and I suspect that with a normal snowpack  it would be a lush area in summer. You’re probably wondering about mosquitos. It sure looks like the area would be friendly to them, but I saw none. Resident Expert reported that she saw one, but that it “gave up”. I don’t think I’ve ever seen a mosquito do that.

Back at camp, Resident Expert served up the backpacking dinner she’d been planning all year. It included a top-secret ingredient (Ramen). We only had one spork, so we had dinner in shifts and shared our utensil. Excellent dinner, simply prepared, and a no-fuss clean up: our continual refinements from recent car camping excursions are yielding tangible benefits. Now it’s time to sit out on the rocks and watch the day go down. 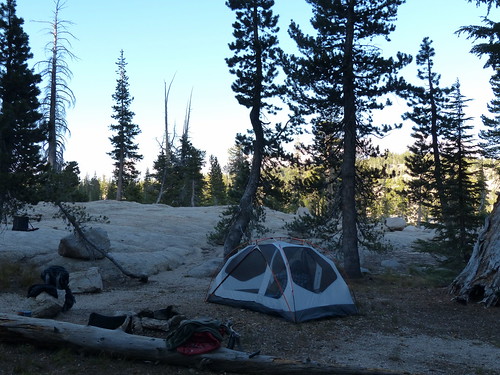 There was not a breath of wind, and the granite shielded us from the sound of other camps closer to the lake, so it was astonishingly quiet. The type of silence that is sometimes described as “deafening”, and prompts you to say “it is so quiet!” periodically. At one point I thought I was hearing the audio signal of the granite’s radioactive decay, but it was probably just the collision of air molecules causing sound waves to hit my eardrums. There were also a zillion stars. The timing was such that we had no clouds and no moon, so all the stars were visible.

Sounds fantastic, right? Well, we did have one glitch, which could have been major, but had a minor impact. My water filter broke after filling up our water bottles. This is the second time this has happened, and fortunately for us we didn’t need any additional water because we were only out one night. The Katadyn Hiker has a well-documented fault, in that the intake port can break off when dismantling the filter. This is especially well-known to me, because it happened a few years ago on our Bearpaw High Sierra Camp trip with an earlier version of this filter. And it’s not really field-repairable once it breaks. Even Duct Tape cannot help you then. But as I said, the impact was minor because I’d just finished tanking up and that gave us plenty of water for our evening tea, morning coffee and our walk the next day. Note to self: next time, bring backup water treatment of some type.

We got a good early start for our hike out, which allowed us to break regularly to take in the scene and look for birds. All too soon, our backpacking trip came to an end.