The last full day of the Rendezvous dawned clear and very cold. They said it was in the ‘teens overnight, and I can accept that. Much of the conversation in our cabin focused on the virtues of home insulation products. 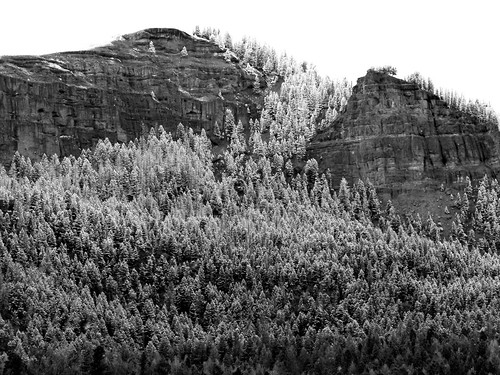 Today the Resident Expert and I have chosen different paths. I was up for another hike, and she was more interested in touring the geothermal features of Yellowstone. I signed up for the Specimen Ridge hike, and Resident Expert set off for the Norris Geyser Basin and other areas of interest in the caldera. What if they saw interesting things on the volcano trip, and my hike was lackluster? This is the torment one faces when selecting a Rendezvous day trip. They had a lot of good stuff we missed out on, but you can only do one thing at a time. For example, there was a trip that focused on drawing and journaling, where you stopped at various places made famous by painters and photographers from the early days, and you would sketch or paint your own images of these scenes. That was scheduled at the same time as the Hellroaring to Home trip, to our dismay. So by splitting up for the day, we’d at least be able to get a first-hand account of another trip.

We gathered at the trailhead to begin the climb to Specimen Ridge. Our guide was again Danielle, and by way of introduction she asked us to say our name and what kind of animal we’d like to be, and why. I said “chickadee”, because they’re busy little birds that don’t mind people too much, and have a distinctive alarm call. As we went around the circle, everybody was choosing tigers, wolverines, birds of prey, and so on. The chickadee isn’t going to last long in this crowd. But before we got very far up the trail, Danielle pointed out a bird song, “there’s your chickadee”. We are everywhere. She also told me that one of the chickadee’s many adaptations to winter weather is its ability to go into regulated hypothermia, lowering its body temperature to conserve energy and survive in extreme cold. If only I’d known, I would have used this skill in Cabin 75 last night. Just be aware, the chickadee is a lot tougher than it looks.

Another bird that was around quite a bit was the Clark’s Nutcracker. We have these in our high mountains, but I did not know their special relationship with the white bark pine forest until we saw it in action here. The Clark is capable of caching almost 100,000 pine seeds every year, and disperses these in thousands of small caches over a wide area – 20 miles or more from the white bark pine forest. And it can remember where all of its cache sites are, amazingly. The white bark pine is having a tough time in the west, due to various factors, and the Clark’s Nutcracker is doing its bit to see that the forest survives.

It’s a non-stop climb up to the top of Specimen Ridge, but the trail is well graded – there are only a few steep sections. You get excellent views of the Yellowstone River and Mt. Washburn as you make your way. 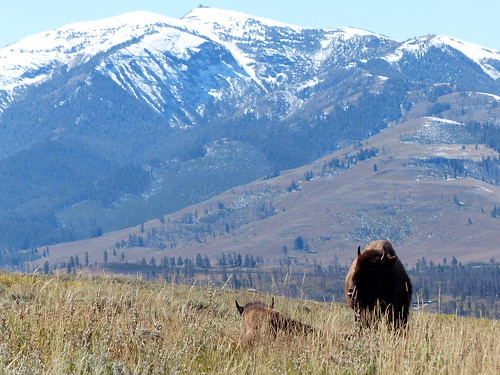 At this wide bend in the river, the Nez Perce crossed the Yellowstone in flight from the pursuing U.S. Army, in 1877. 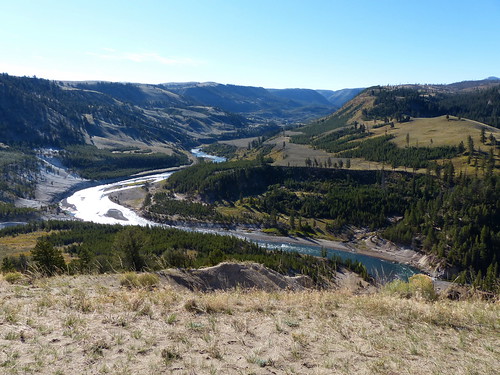 I tried to conjure up a grizzly bear to cross the plateau above the river, but it failed to materialize. That would have been perfect.

Onward and upward, we took a lunch break on a hill a mile or so from the summit. Our path forward was blocked by herds of bison and pronghorn. The bison can seem fairly placid, but they account for more wildlife-human conflicts in Yellowstone than any other animal. And this herd included a couple of snorting and stomping bulls, so caution was warranted. 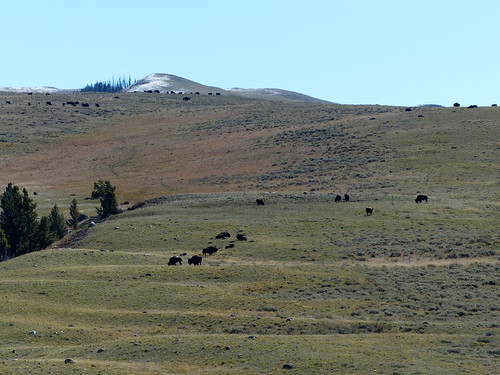 We started moving forward, keeping to the left of the herd and fanning out across the sagebrush. The slow, steady pressure of our forward movement prompted the bison to continue shifting away, and we safely made it past them. Now, on the left, we have a herd of pronghorn. They’re less dangerous, but you still want to keep a good distance away. They are “wild animals” after all. Within the pronghorn herd there was quite a bit of competition for leadership roles among the lads. Lots of racing around and bold stares between the contestants. Pronghorn are fast. Their top speed is 55 mph, and – another good animal fact from our guide – they adapted this speed characteristic to outrun now-extinct predators, such as the North American cheetah. Biologists call these adaptions shaped by ancient enemies “relict behavior”. I think I probably have a few of those. Here’s a pronghorn fawn taking it easy, unconcerned with enemies ancient or modern, because mom is nearby. 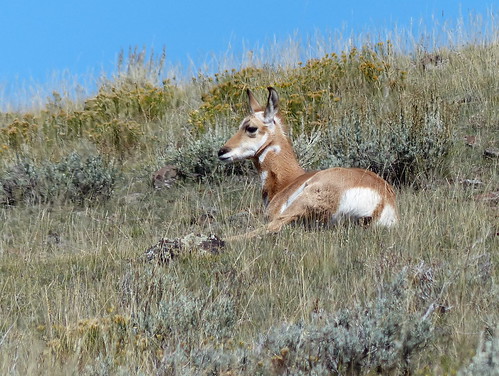 It was striking to me that both the bison and pronghorn herds repositioned in response to our passage between them. They didn’t run away, but slowly shifted as we moved by, keeping a reasonable distance. In this way it seemed like our group had become another type of herd, as we were adjusting our movements in similar ways. There seemed to be equal and opposite reactions as we moved, and when they did. It was actually nice being part of a herd at that moment. 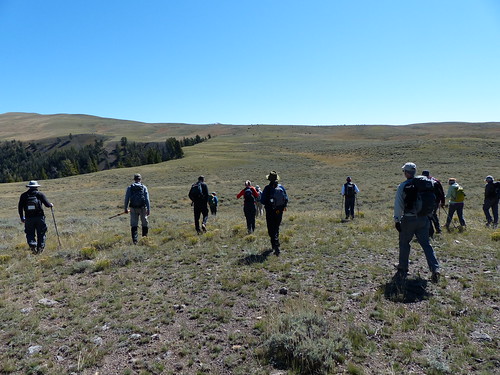 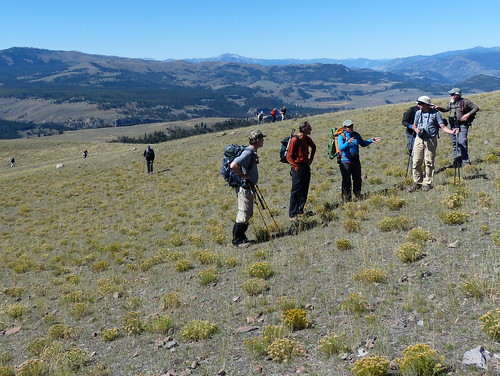 It’s a long way down from the top of Specimen Ridge, and the views are astonishing. Here we are beginning the descent. 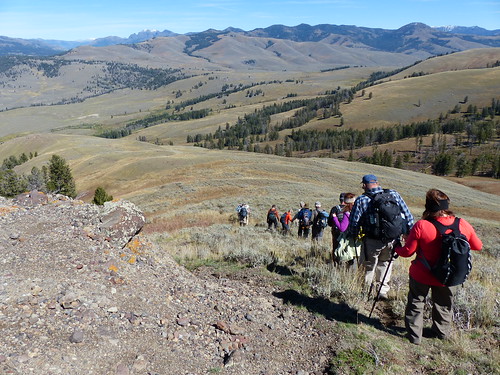 On our way, we side-trailed over to the petrified forest to see a still-standing redwood tree, from a time when redwoods grew here. 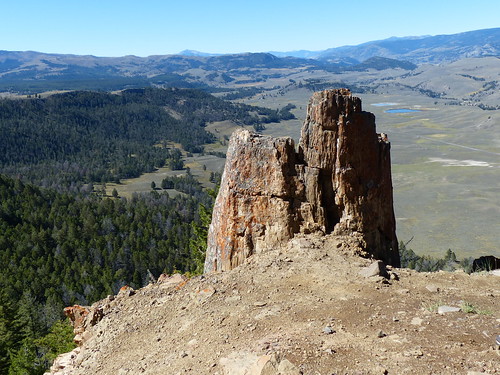 You can still see growth rings in these trees. 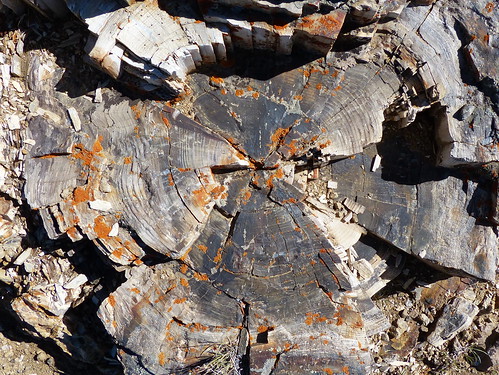 We all stopped for a while on the side of the ridge, looking out at the view. A trio of red-tailed hawks caught a thermal and spun up from below, eventually riding that up a thousand feet above us. On our first day in Yellowstone we walked a short trail called “Forces of the Northern Range”. For whatever reason, those forces caught up to me here, and it will forever be a power spot.

I wondered where the Resident Expert was then. She was out wandering somewhere in the Yellowstone Caldera, closer to earth’s mantle than we would otherwise be. 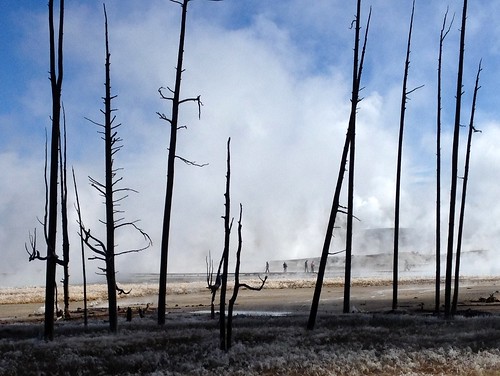 I didn’t want to leave my power spot, but the herd was continuing on down the hill, so I went with them. I would have missed the wolf scat and bear print that our guide identified, had I not joined in. There’s so much that a skilled observer can identify that I would never see. Additionally, I would have missed the van transport for the herd back to the Lodge.

The Resident Expert had arrived back just before we did, and I got the low-down on the geothermal activities. Apparently the earth’s molten core is still molten. This was our last cocktail hour and dinner, and so the evening had a tinge of melancholy. The fellowship would be disbanding soon. I could see why people come back for the Rendezvous year after year. We headed back to the cabin early, to get squared away for the next day’s departure.

I didn’t want the Roosevelt Rendezvous to end, and I’m also not quite ready to wrap up this narrative. I’ll have one more installment tomorrow for faithful readers of Mellowcat.