One More for the Road

Now we must take our leave of the fine company at the Roosevelt Rendezvous. Our last morning dawned fine and bright, and we gathered our gear and headed for the lodge for breakfast. About half of the group took advantage of an early morning wildlife watching tour, but we had to get going back to Bozeman for the flight home before they’d return. But some of our chums were still there, giving us one more jolt of camaraderie with our coffee. The dining room at the lodge is classic. 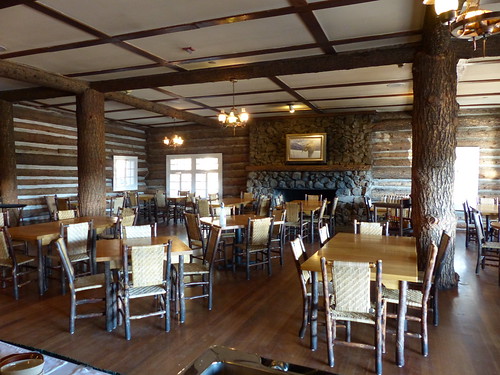 All 50 of us, along with volunteers and guides, would gather here for dinner and breakfast each day. Somehow the builders of the lodge were able to design it so that everyone can be talking, and you can still hear the person across from you and carry on a normal conversation. Apparently a lost art, when it comes to modern day restaurant design. And conversation was had. The Rendezvous participants came from all over, so you are able to get a first-hand eyewitness update on ice-fishing conditions in Minnesota, black bear management issues in Florida, the effects of the Polar Vortex in Vermont, and birding on the Outer Banks of the Carolinas. I can report that the nation’s many regional accents are still going strong.

It was great to have a guide or volunteer at the table as well, as you don’t have as much of an opportunity to chat when out with a large group. At our last breakfast, our young guide (they’re all young, enthusiastic, and terrific people – a promising future for humanity is assured) was saying that her boyfriend is studying geology. My table-mate asked her where you would go to work as a geologist, and the guide said “New Zealand”. The questioner turned to me and said, “these kids don’t monkey around.”

We had enough time for a probe out into the Lamar Valley, where there are many animals. We said farewell to the Lodge staff, loaded up the Subaru and headed out. 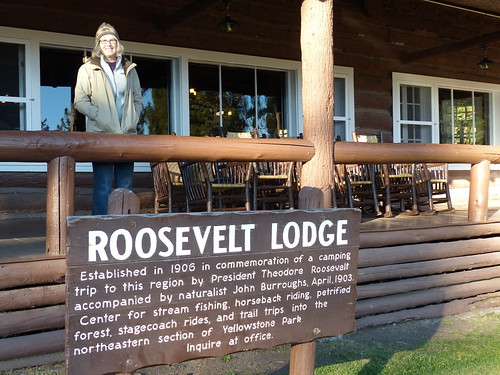 Others had reported seeing members of the Junction Butte wolf pack at Slough Creek on previous days, so we made our way there. The road was lined with cars and there was a group of people with spotting scopes, so this looked promising, even though it was getting late in the morning. The wolves are more likely seen at dawn and dusk, and it was about 8am by then. Nevertheless, we joined a small group and quizzed them on the availability of wolves. A fellow told me, “Well, sir, there were five of them earlier, two black and three gray, but they dropped down between those ridges.”. I asked if he’d point out more precisely where they were seen. “Yes, sir, right next to that round tree, if you look straight up from that bison and to the left.” Got it. I thanked him for sharing the info. I’d never have known where to look. “You’re welcome, sir, you have a good day.” I’m not accustomed to this “sir” business, but I certainly could get used to it. 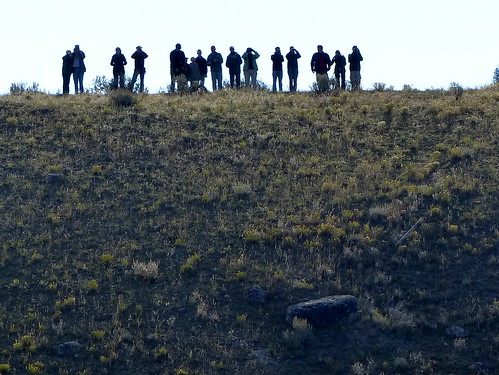 We looked around for a while, but no wolves were visible. Our binoculars are fine for spotting a chickadee in a tree 20 yards away, but fall a bit short when you’re looking for something more than a mile away. Then, a bit of excitement down the line. These micro-societies of wolf watchers are a congenial and generous (and polite) group. This fellow (different guy) pointed out the location, and sure enough, there’s a black wolf striding confidently through the grass. Even at this far remove you can sense this animal’s power. He was alternately visible and invisible, as he moved through the sagebrush. Then he vanished altogether. I went back to glassing the area around that round tree. Hey! There’s another one! Another black wolf. This time I was able to assist the people next to us in spotting its location, and that paid off because they had a spotting scope. We must acquire one of these. Resident Expert was viewing the wolf with our binocular, and reported seeing his ears. I checked this out through the spotting scope, and sure enough. A black wolf, looking straight back at us from two miles away. The apex predator. 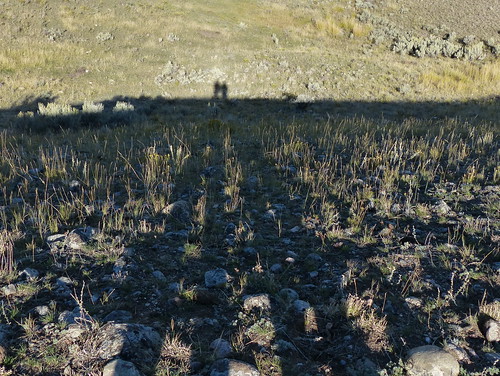 You can’t beat that, so we left Yellowstone then and journeyed home.

On our way out of the Lodge that morning, we chatted with a couple who’ve been to the Rendezvous several times. Over the years they’d talked to friends and family about it, and this year they were joined by eight of them. They said they go every two years, and as soon as they return home from the Rendezvous they start planning for the next one. I suggest we do the same.