In Which We Get Yelled At

Many years ago, on a visit to Mesa Verde National Park, the Resident Expert got yelled at by a park ranger. If you haven’t been to Mesa Verde, I encourage you to go there. Here’s a picture of the Cliff Palace ruin. 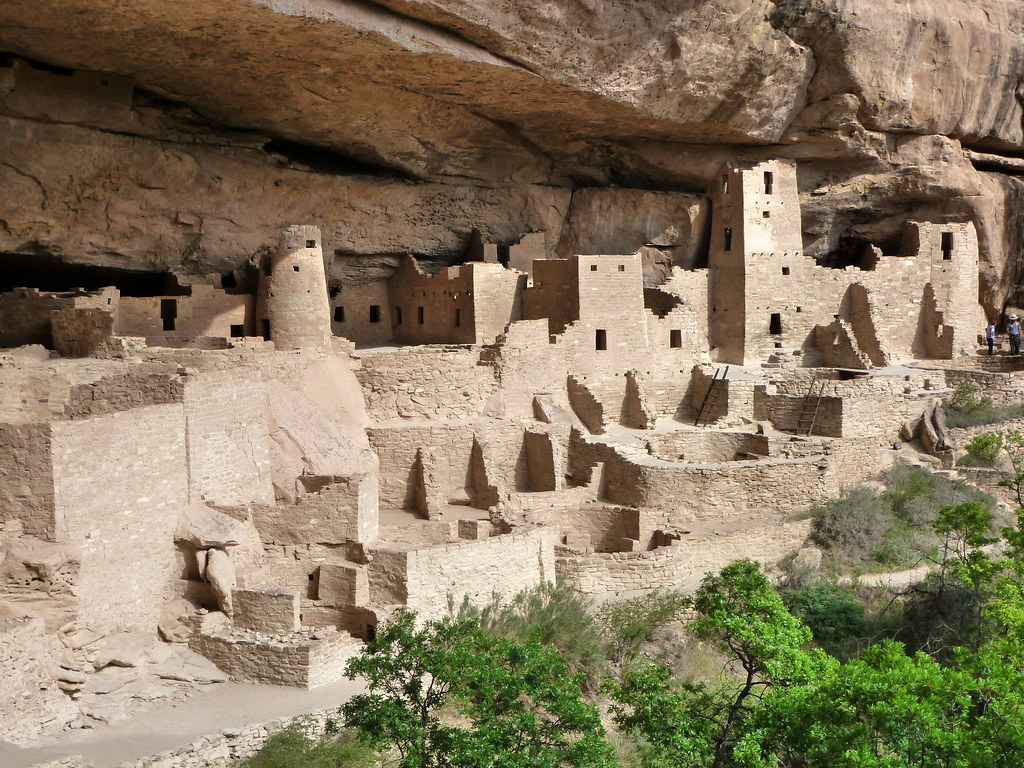 This was taken on a guided walk a couple of years ago, and so there aren’t any people around. But if you visit with the regular people in the summertime, there are visitors milling about here and there. And one of those visitors, years ago, was the Resident Expert, who stepped up on one of the sandstone walls to get a better look at something. This action was immediately followed by a “Please stay off the Monument!” hollered from across the way. All eyes turned to the Resident Expert, who obediently stepped off the monument. To this day, that episode looms large. No matter where we travel, there’s some opportunity for the Resident Expert to climb up on something she’s not supposed to. Here she is again, attempting unauthorized access of the Gallarus Oratory, an early Christian church on the Dingle Peninsula, County Kerry, Ireland. 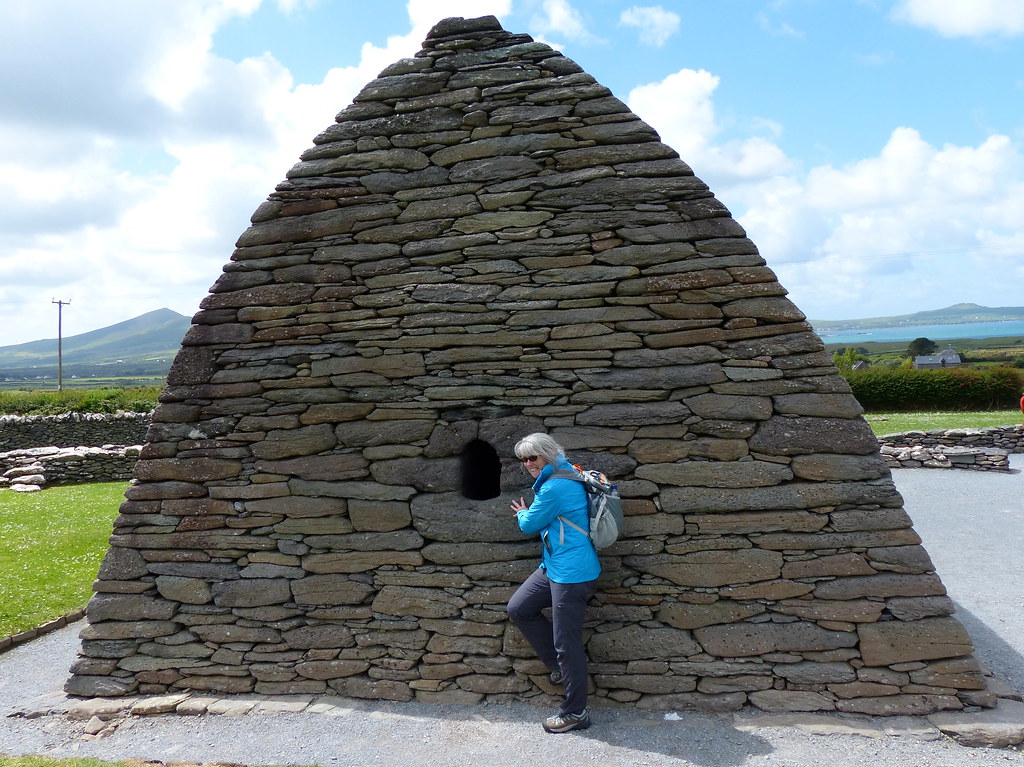 No visit to anything historic and climbable goes without the Resident Expert simulating another breach of protocol, prompting a swift “Please stay off the Monument!” response.

Why am I telling you this now? Because we just got yelled at again.

What with it being a 4-day holiday weekend and all, we decided to spend one of those days on a birding expedition to the Sacramento Valley. There are numerous National Wildlife Refuges up there, and at this time of year they are chock-full of birds migrating from the Arctic, Siberia, and other nice places. Migratory birds arrive by the millions (that’s right, millions) during the winter. Here come some more Snow Geese. 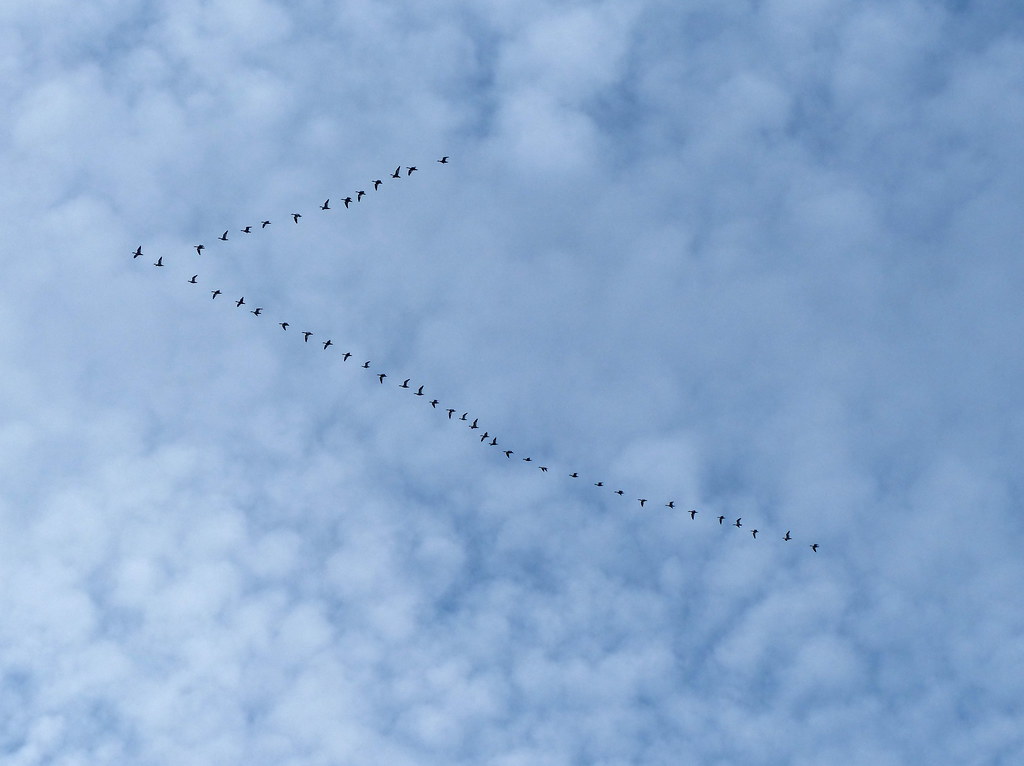 Other birders mentioned the Colusa NWR as a worthwhile destination. Good enough for me! I would otherwise have no idea where to go. Even though I consider myself fairly well oriented to my adopted home state, the northern Sacramento Valley is unknown territory. It takes about 2.5 hours to get there from Mellowcat HQ, so we left reasonably early (8:30 am). The route took us across the Bay Bridge, and we examined the new span for faulty bolts and signs of corrosion. The SF Chronicle has been bird-dogging the bridge project, and prints frequent articles about cost over-runs and faulty construction. Looked good to me though. When you’re on the new span, it feels like you’re in the future.

It’s a long haul up to Colusa NWR, but we finally rolled in at about 11am. We were pretty excited about finally arriving, because we could get outside of the vehicle and see some birds. There’s an observation deck near some ponds right by the parking lot, and a sign for an Auto Tour route. There were a few people on the deck and no obvious place to park, so we rolled on to a pull out just 20 meters or so down the road. The Expert said there was a sign saying you couldn’t get out of your car. Why? Of course I can get out of the car. We stopped, and we got out of the car. I started glassing the pond, examining the many new and unfamiliar birds, and the Resident Expert walked back to get another look at that sign. Pretty soon I heard some hollering back near the observation deck. Then an official vehicle drives up, and the driver is gesturing vehemently, indicating I should get back in my car. She says, “You’re lucky it’s me and not the Feds, otherwise you’d get a $275 fine. Minimum!”. Yes, lucky for me. So, as you have already guessed, the sign we had passed did say that visitors must stay in their vehicles when on the Auto Tour, or face a $275 fine. The Resident Expert had already gotten this message (delivered in hollering form) after walking back to the sign, and since she was outside the vehicle I turned around and drove back to the start. By then our admonisher, a docent for the Refuge, had stopped yelling at us and was dispensing information about the birds. Quite an abrupt transition from our introduction. There are times for extreme rage: this was probably not one of them. A more helpful approach might have been, “Hey, you must have missed that sign back there. You’re supposed to stay in your car on the Auto Tour. Here’s why.” And then follow that up with the good reasons for this rule.

The good argument for this is that your car functions as a bird blind. You can be quite close to them in your car, and they seem not to care. Step out, and they disperse. A general rule for any wildlife viewing is to avoid doing anything that changes the animals behavior. Good rule, in my book. We haven’t encountered this autos-only rule when birding on the Bay or on the coast, but maybe there’s just no hope of enforcing such a thing outside of a wildlife refuge.

Still, I think that some middle ground could be attained by offering more observation decks (which also function as blinds) or short walking paths in the Refuge. We really wanted to get out of the car, but stayed in and continued on the Auto Tour route. After a short way we stopped and ate our turkey sandwiches, and discussed our recent interaction. After much analysis, we decided we should be held blameless, even though we actually did break a rule. And then some birds flew by, creating one of those “what the hell was that” moments. These were largish, iridescent green and purple birds with long, down-turned beaks. No question about it, we had a new bird for the List, if only I could figure out what it was. I took several pictures. 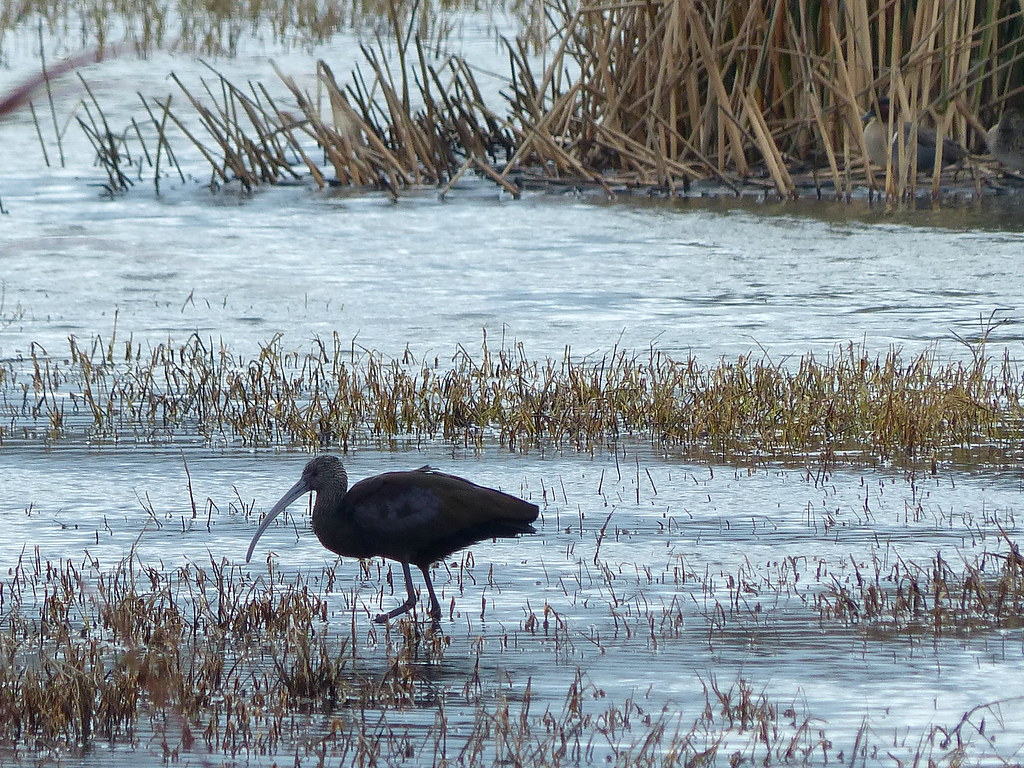 It’s the White-faced Ibis, a bird I’d hoped to see on many an outing. At last, we meet. The Auto Tour continued, and there were birds a-plenty. Those who recommended visiting this place were right on. Eventually we ended our Auto Tour and went back out on the observation deck. A helpful guy pointed out a Eurasian Widgeon, a singleton among many other more common birds. People kept coming and going, looking for a very rare bird that has wintered at Colusa in recent years. An Asian falcated duck has decided to make Colusa, CA his winter home. People come from all over for a look at this bird, as he’s way outside his normal range (that would be Asia). We didn’t see him. Who knows how he ever found his way here to begin with, but he has been loyal to Colusa. They call this “site fidelity”, and it’s not uncommon among migratory birds. Once they find good habitat, they stick with it. Even if it’s in the wrong hemisphere. I share this behavior trait: at work, I have my lunch on the same bench every day.

After Colusa NWR we scouted a couple of other wildlife refuges nearby, but the weather was deteriorating and they also seemed to only offer Auto Tours. There must be some place where they let you walk around without getting yelled at. We will investigate further and report our findings.