Here we go again with Project Feederwatch. It’s another Cornell Bird Lab initiative, where regular people like us record wintertime visitors to our bird feeders. There’s more structure to it than the standard eBird data entry. They want you to watch the feeder on two consecutive days once a week, and note the highest number of a bird type seen at the feeder over those days. If you see two House Finches on Saturday and five on Sunday, you go with the five. I’m going to be watching the feeders on the weekends anyway, so why not do my bit for Science and count a few birds while I’m at it?

This is timed just right, because all the winter birds are back, and they’re beginning to get their good bright colors and are checking out the area for possible nest sites. I don’t know if it was the rain we had or what, but this past weekend we just had a ton of birds at the feeders. Here’s a look at various finches. 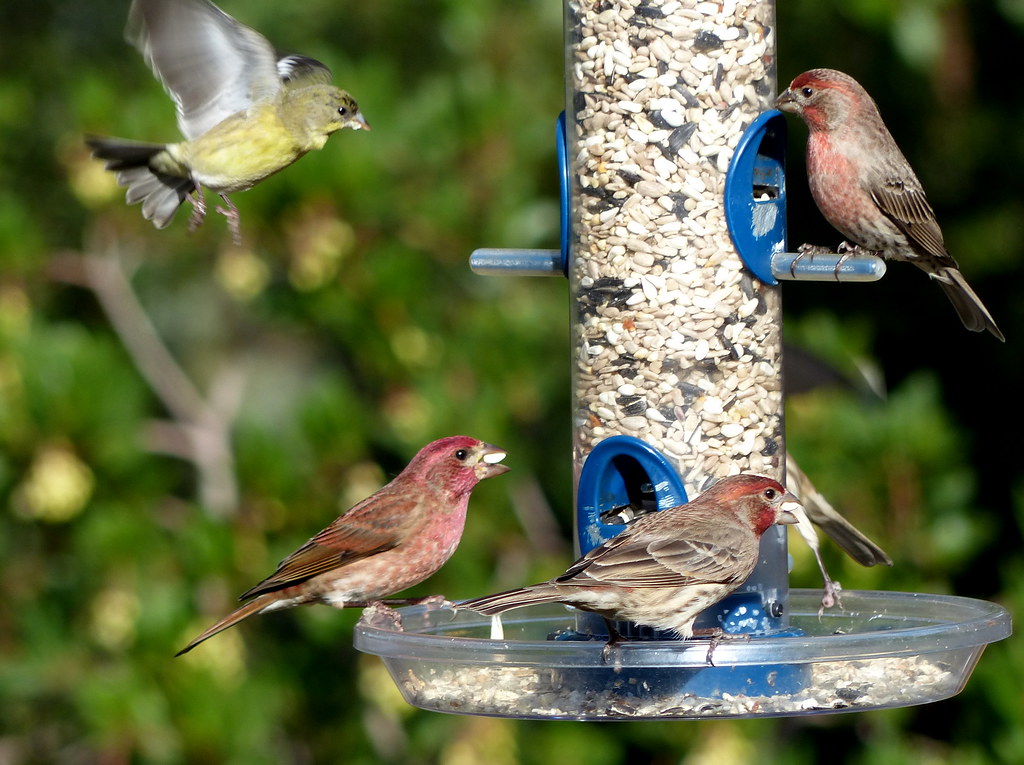 Those two low down helpfully give us the side-to-side comparison of the Purple Finch (left) and House Finch (right). Lesser Goldfinch incoming from the upper left. And that’s not all – we had 16 different bird types make an appearance, including one that I’d not yet seen in the backyard. A small bird, looked like a nuthatch, was hopping around in our neighbor’s pine tree. We get the White-breasted Nuthatch, but this was smaller. Different. 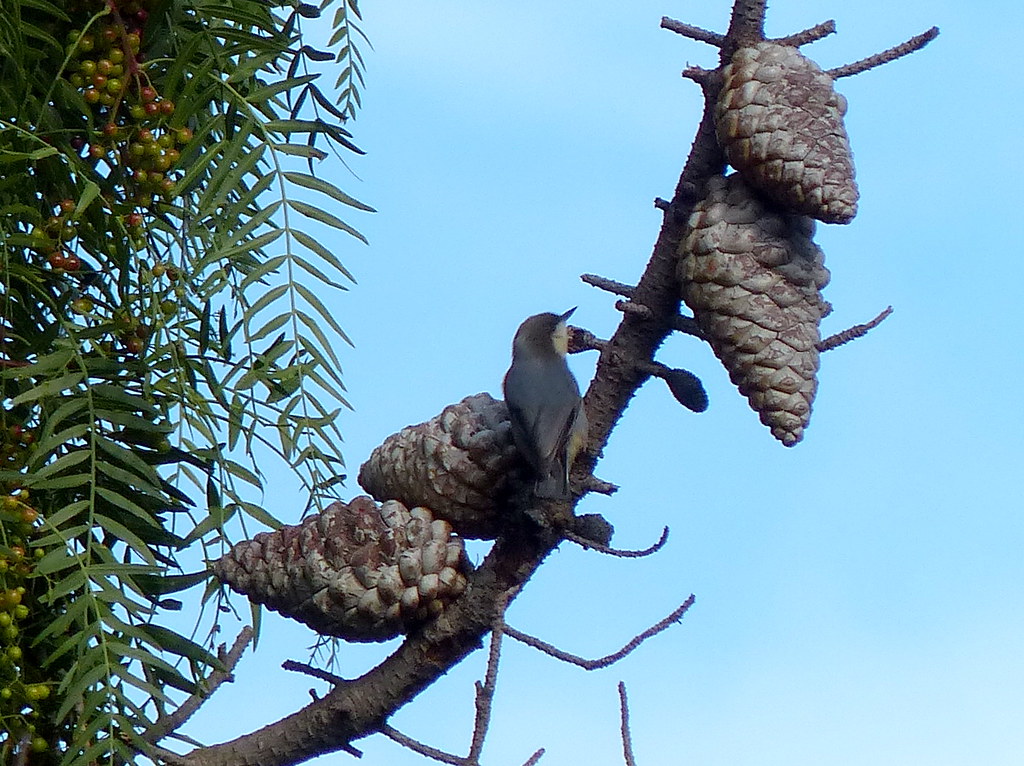 It’s the Pygmy Nuthatch, the same bird they use in the Sequoia Audubon logo. They’ve probably visited the backyard before, but they hop around so much and are so very tiny they’re easily overlooked. This one eventually made a few visits to the feeder, but was really quick about it. Here it is, hiding in some plants below the feeder, waiting his turn. 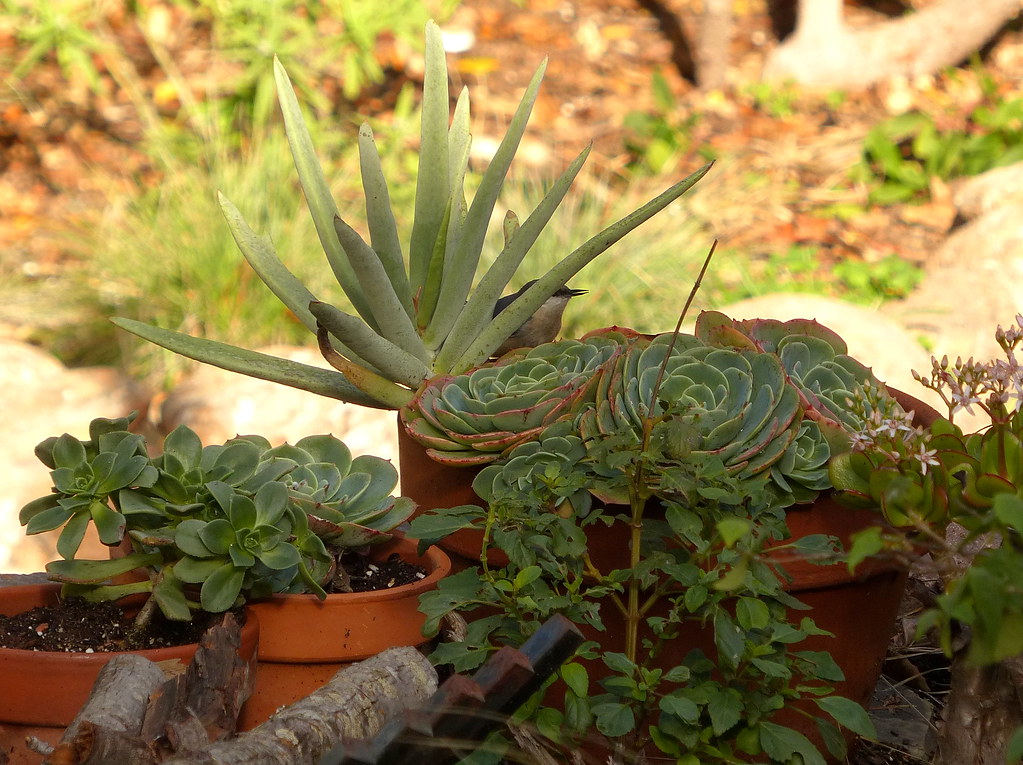 We also had a flyover of about 30 American Robins, and an aerial battle between a raven and hawk. On Feederwatch, you only count the birds attracted to the feeder, birdbath, or plants close by, so the flyover action doesn’t get counted. If a Sharp-shinned Hawk swooped in to grab a bird at the feeder, that would count.

Along with the feeder action, an Oak Titmouse was checking out a nesting box. 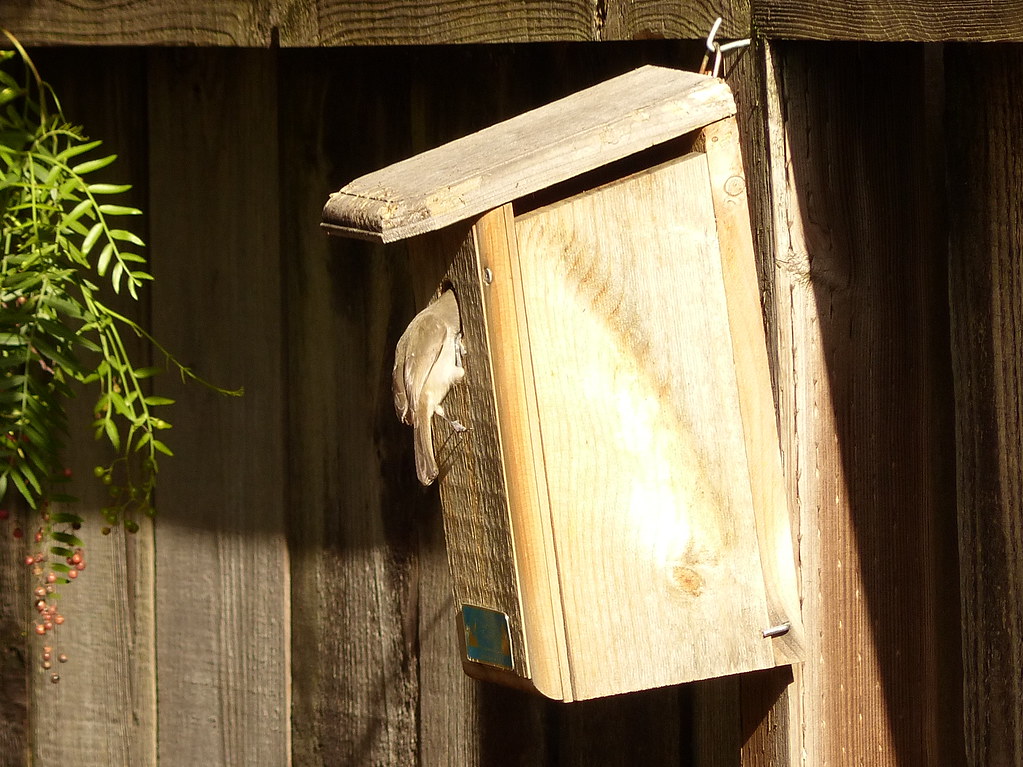 A pair nested here last year, and I’m told that these birds mate for life and are territorial about their nest area. Could be the same ones, back to nest again. One more reason to stay on Feederwatch.