Rambling in the Northeast Quadrant – Episode 2

We now continue the account begun yesterday of our trip to the Plumas/Tahoe National Forest region. Here’s a picture of the Sierra Buttes taken from Mills Peak, to get you oriented. 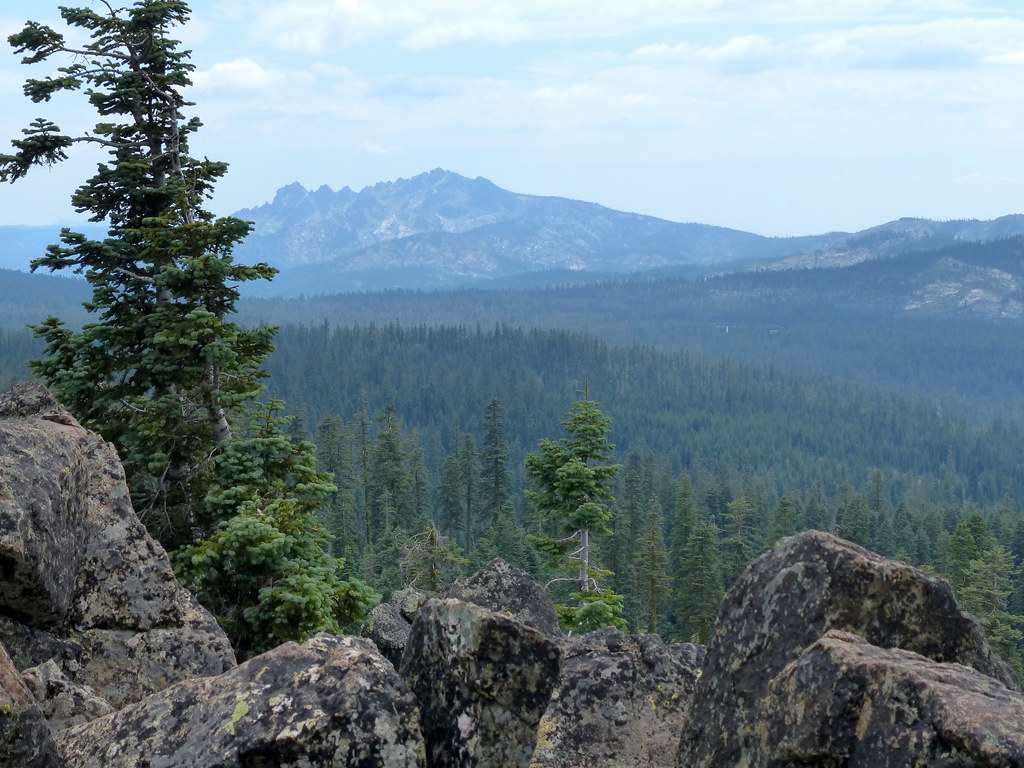 Let’s see now, where were we? Right – in the Diablo Campground, with unruly neighbors and a gathering thunderstorm in the middle of the night. Having been through an exciting storm earlier in the day, we thought it best to batten down the camp in case things started getting out of hand. We had left a bunch of stuff out on the picnic table, and proceeded to stow that in the trusty Forester. As we did so, the rain, thunder, and lightning intensified. Thunder is really loud when you’re outside. It seemed like the lightning bolts were blasting away every 5 or 10 seconds. I was getting concerned that we’d have a repeat of the afternoon hailstorm – how would our tent hold up under that? Just then simultaneous thunder and lightning exploded over the camp. It must have been cloud to cloud, as I didn’t see any nearby trees burst into flame. But man, it was loud. We got in the car, along with our hastily gathered gear, to ride this one out. It was raining so heavily that it slightly diminished the flames of our neighbor’s campfire. They had been tossing flammable materials into it all night, and it would otherwise have burned for days.

We were soaked, sleepy, and rattled by the storm, but very pleased to see that the bunch next door were driven into their squalid shelters. Party’s over for tonight, my friends. The feared hailstorm did not materialize, and as soon as the rain let up some we headed back into the tent. The thunder and lightning continued for some time, but gradually moved off to the northwest, and by early morning quiet had returned. That’s the one good thing about having a party crowd camped next door – they tend not to be early risers.

There was a huge mess around the campground dumpsters – trash was everywhere. I’d heard somebody crashing around there during the night, and figured it was one of the neighbors battling the confusing latch on the dumpster lid. And also figured that they’d just tossed all their trash on the ground when they became frustrated by the complex dumpster latch. But this was an unfair judgement. Other campers saw bears attacking the dumpster during the night. One of the more clever bears figured out how to open the lid, and was seen flinging bags of trash out for the less technically-savvy bears to enjoy. 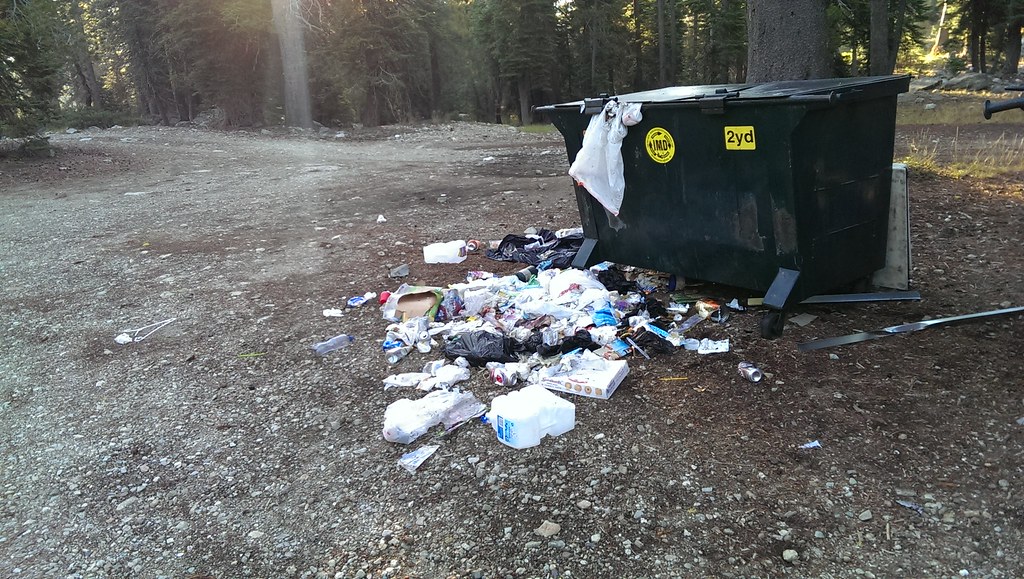 Yes, that is a plastic coat-hanger you see to the left of the main trash heap. Apparently someone decided they no longer needed that during their camping stay. Maybe some of the other campgrounds offer recycling options, but ours was a straight to landfill waste stream. Almost all of the trash left behind by the bears was easily recyclable plastic, bottles, cans, and paper. If we could get the bears to do some sorting we might be on to something here, although evidence would suggest that this is not their strong suit.

Since yesterday’s hike used up most of our physical reserves, we planned to head back to the Sierra Valley for some birding. We got a good early start, which was probably for the best. On the way out I noticed that one of the Men had left one of the Truck windows down overnight during the storm. I could imagine that upon awakening he would see this, and he would express his rage and assignment of blame to others at a high volume.

We were long gone before that domestic drama unfolded, on our way back out to the Sierra Valley. Remember the guy from yesterday who told us that our loop hike would be an extra 13 miles long, and also mentioned a secret birding spot called the “Bird Bridge”? No? Nevertheless, we did meet this guy, and he gave us directions to Bird Bridge. You know Portola? (no.) On the 70 driving east, (have to check the map) make a right on A23 (I’ll never remember this.) and keep going until you see an electrical utility yard, all fenced in, maybe it’s a voltage reducer or something (whatever!), and make a left there on Marble Springs Road. (is somebody writing this down?) Take that about three miles or so, it’s a dirt road, and you’ll get to the bridge. But this isn’t the time of year for birds. (now you tell me.)

This guy was like a living Google Map – his directions were spot on. And, wrong season that it was, we saw plenty of birds. Here’s one right now – a Northern Harrier watching over Marble Spring Road. 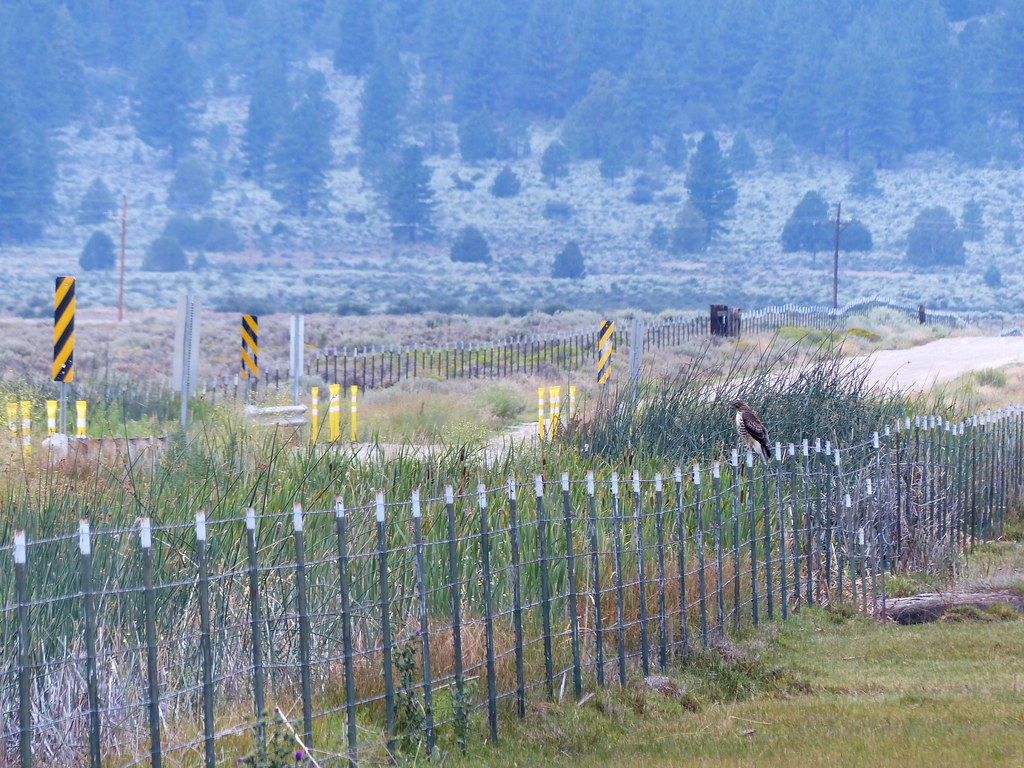 This is a big area for raptors, and we saw probably a dozen American Kestrel, and numerous Northern Harriers and Red-tailed Hawks. Also, plenty of Yellow-headed Blackbirds, Vesper Sparrow, White-faced Ibis, and others we don’t see around home, like the Common Nighthawk and White Pelican. I’ll have to come back here some time when the birding is good. Here are a few birds for you.

Yellow-headed Blackbird with a bug. 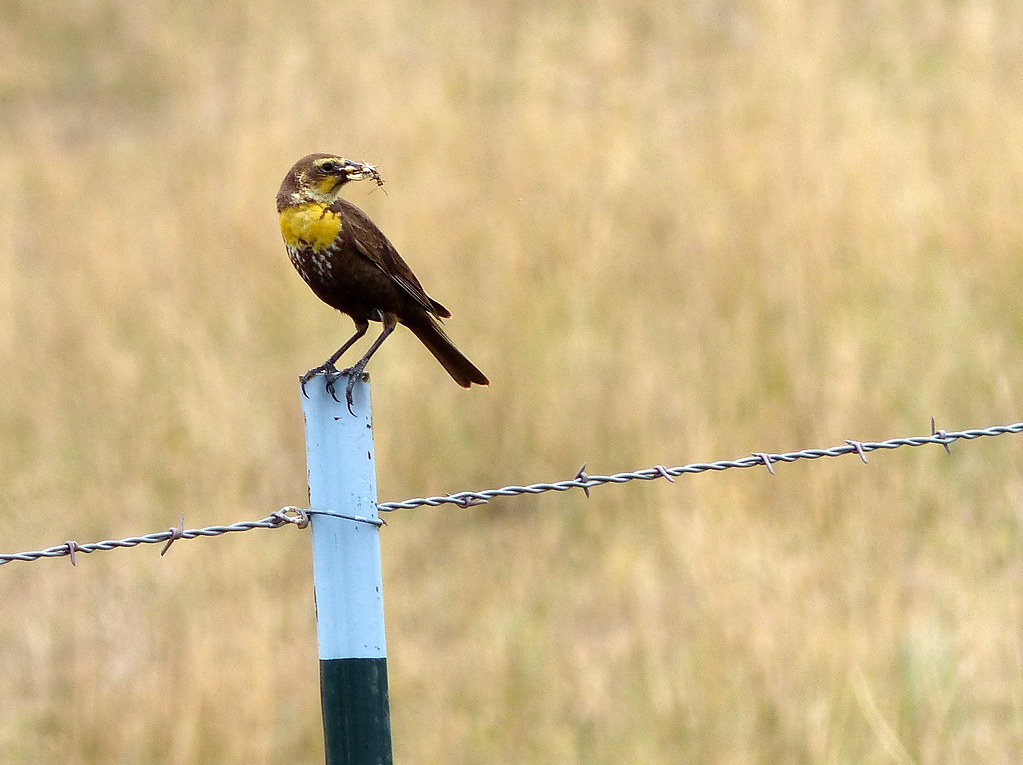 One of the many raptors watching for movement in the grasslands. 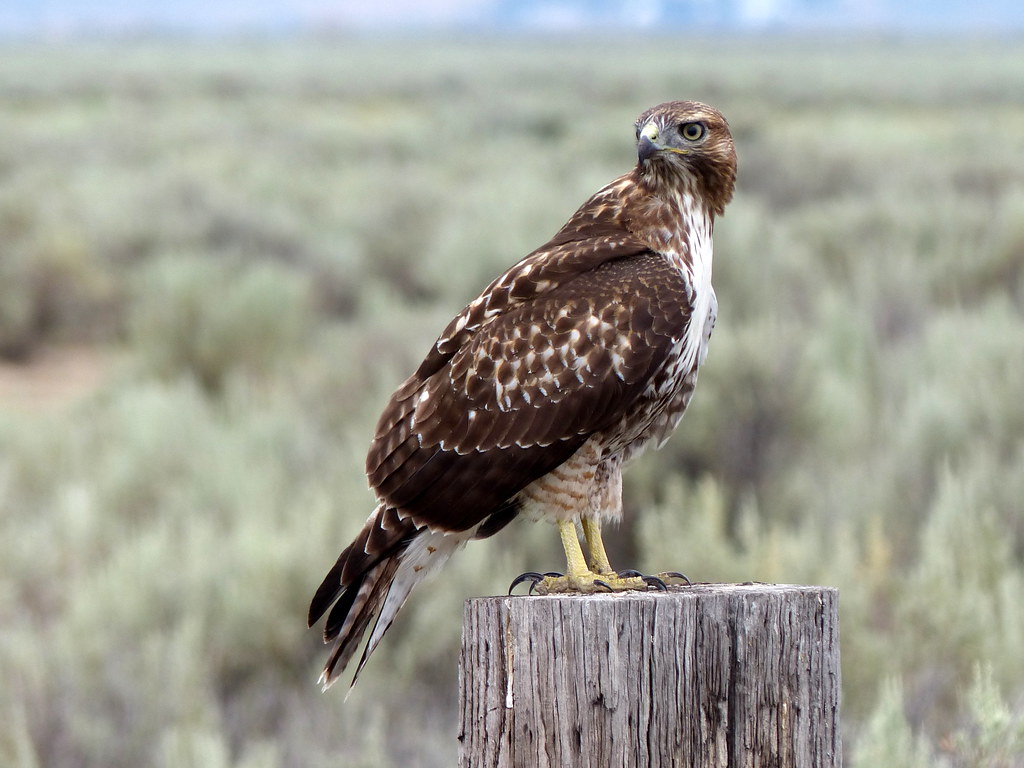 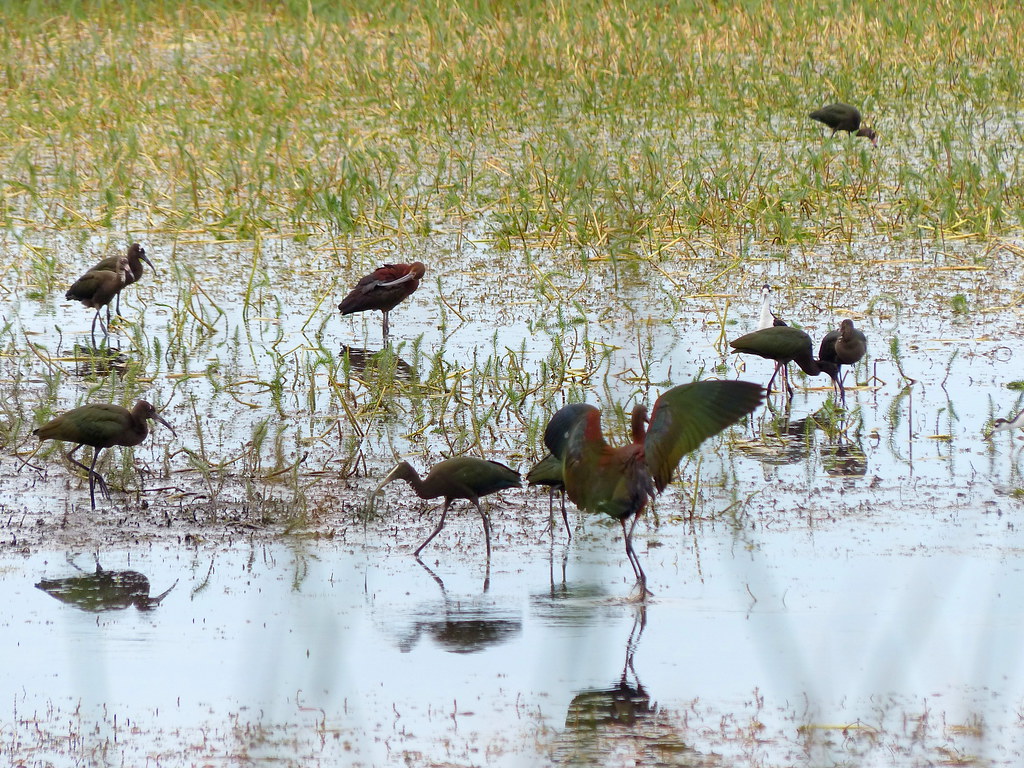 A Cliff Sparrow on Bird Bridge 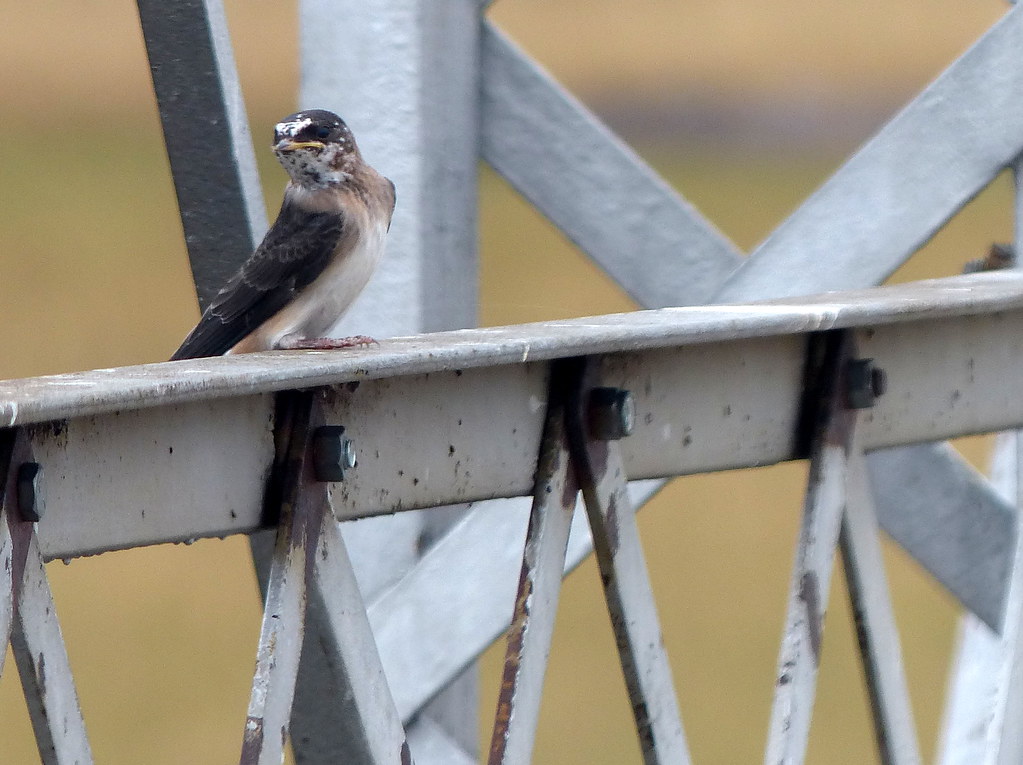 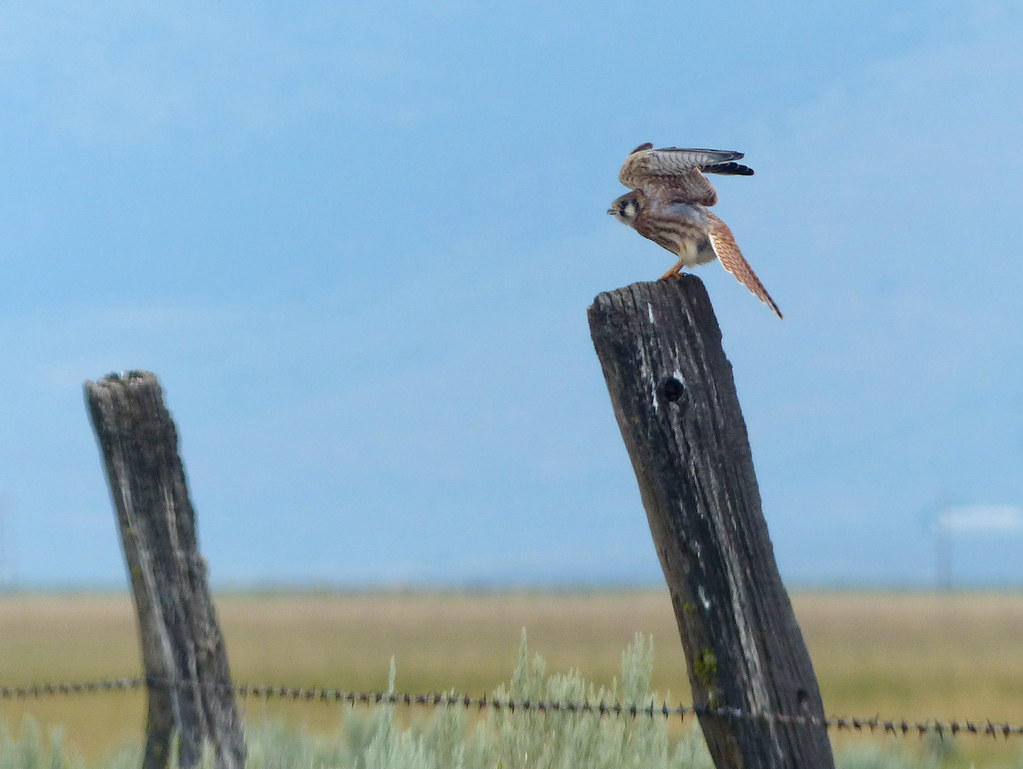 Well worth a visit, if you’re ever in the area. We’ve barely explored this vast alpine valley – I’m sure there are more birds out there. It’s a bit out of the way, but if you follow the directions that guy gave us, you’ll have no problem. 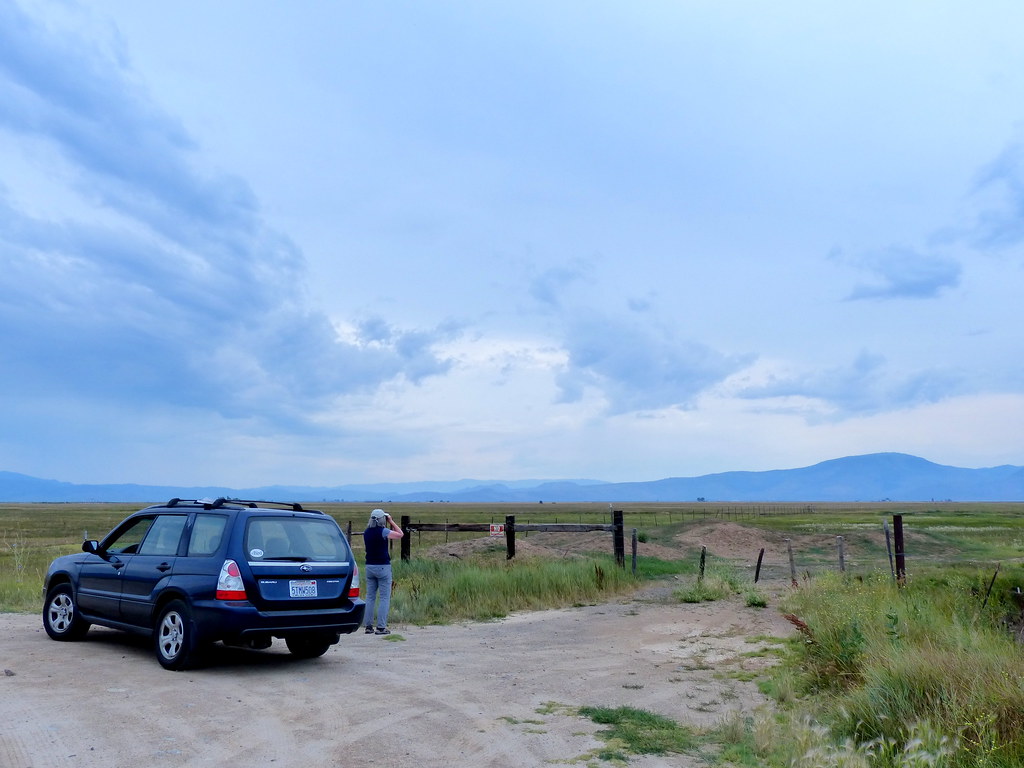 We explored a bit more, driving around on the many dirt or casually paved roads provided by your US National Forest Service. A highlight was the road up to the Red Fir grove, a mature stand of these trees, curiously spared by the axeman, on the road up to Mills Peak. If you look closely, you might see a Brown Creeper, creeping up the side of one of these fine trees. 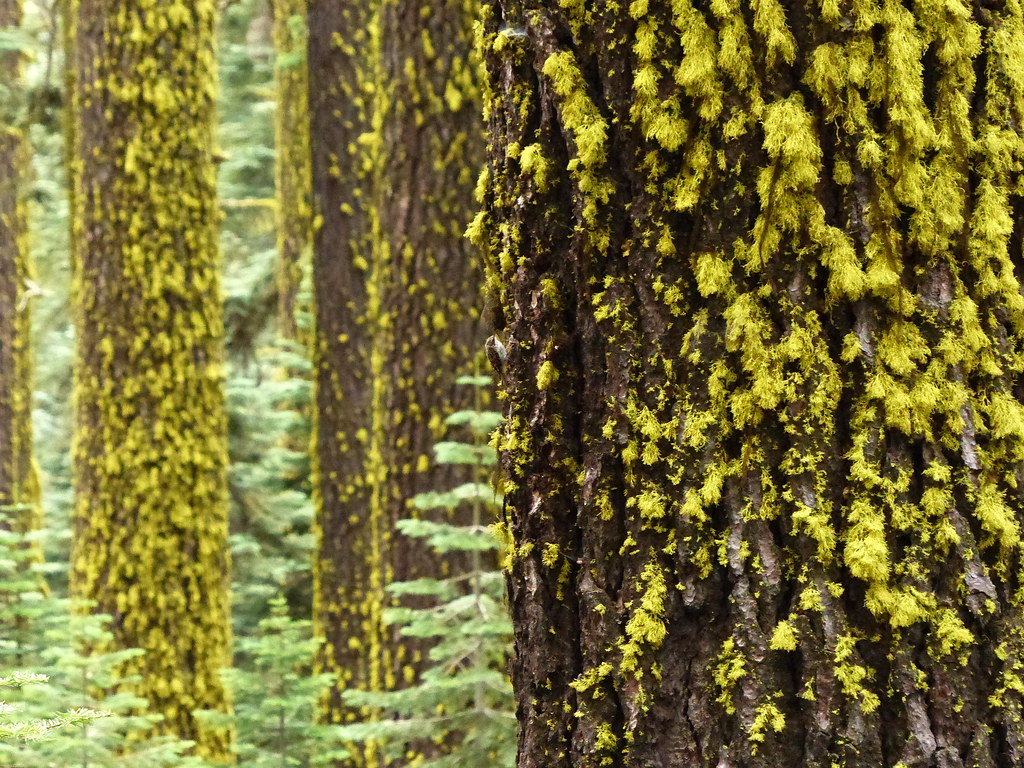 Keep going, and you will soon reach the Mills Peak Lookout, one of the many fire lookouts in the area. The fellow manning this station confessed to being a bit cranky, as he was up all night with last night’s storm. At least he didn’t have to deal with noisy camper neighbors. Here’s the Resident Expert on the steps leading up to the Lookout. 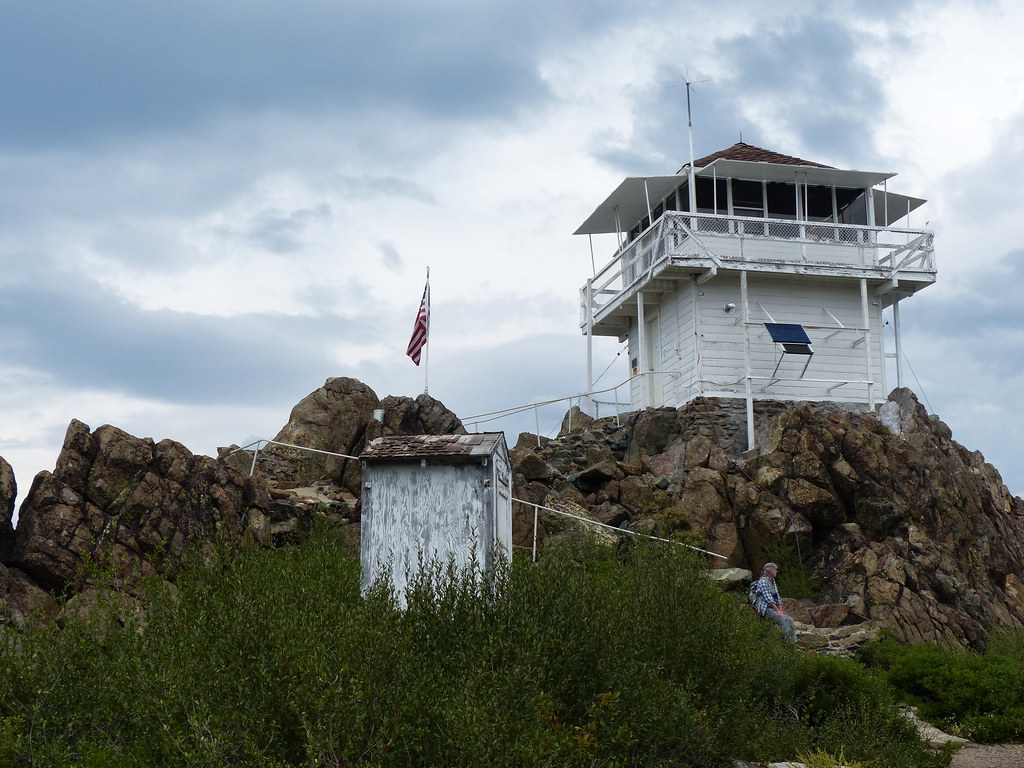 Looks like another storm’s a-brewin’. We heard a few rumbles of thunder and started back down the hill. There’s a hiking and mountain biking trail to this spot. The mountain bikers we encountered were uniformly cheerful and friendly.

We checked out a couple more places, basically putting off the inevitable of going back to camp and having to deal with the group next door. When we finally got back, they were gone! Along with just about everybody else in the campground. What a difference between Saturday and Sunday night camping – for summertime camping, we will aim for Sunday through Thursday from now on. Enough with the weekend riff-raff.

There were two or three other campsites occupied, but not within sight of our location. It was like we had the place to ourselves. Until the bears came back, that is. Now that they’ve figured out the dumpster latch, I expect they’ll be regular visitors. 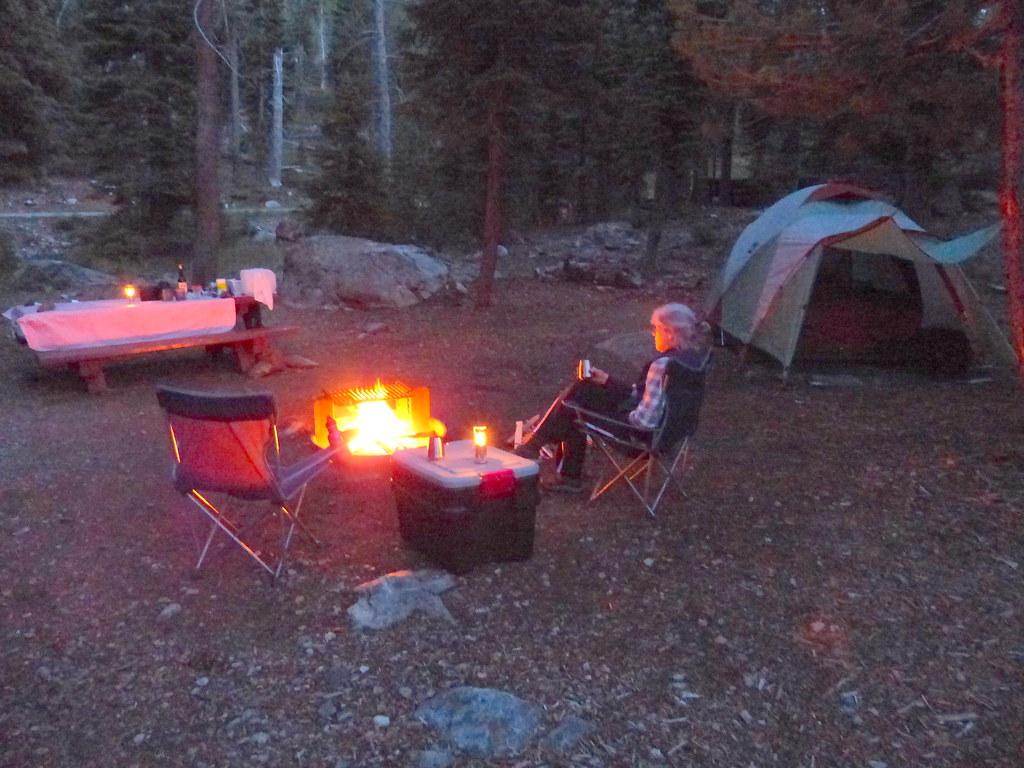