It would be nice if every bird was seen in his or her natural setting, but that is rarely going to be the case when you inhabit a world that has been radically altered by you-know-who (Man). Nevertheless, there are birds to be seen in parking lots, high voltage power lines, and highway overpasses. Herewith are two case studies. First off, the Barn Owl. I’ve been aware of the Downtown Owl for a few months, but just hadn’t gotten around to looking for it until last week. Ebird shows us right where it is, even identifying the tree as the Barn Owl Tree. I went down there after work on Wednesday, but it was way too early for the owls. The sun hadn’t set – no self-respecting owl would be seen at this hour. Undaunted, I laid out a plan to visit the Barn Owl Tree early on Saturday morning. And when Saturday rolled around, I rousted myself before dawn to do some owling. As I stood in the kitchen by the coffee maker, waiting for it to finish making coffee, which was taking forever, I saw the Resident Expert standing over there in the dining room, in her wildly striped pajamas, asking “are we going to see the owls?”. You better believe it.

Downtown we went, and scanned the tree for owls. Don’t see any. Hmm. What else is there to do in downtown Redwood City at 6:30 am on Saturday? I’ll tell you what – nothing. We better have another look at that tree.

I read something somewhere about owl pellets, and I encourage you to do the same. They are not like us, the owls. Their ways are not our ways. I scouted around the base of the tree, and sure enough, there’s a heap of owl pellets. I look up, and there’s the owl. 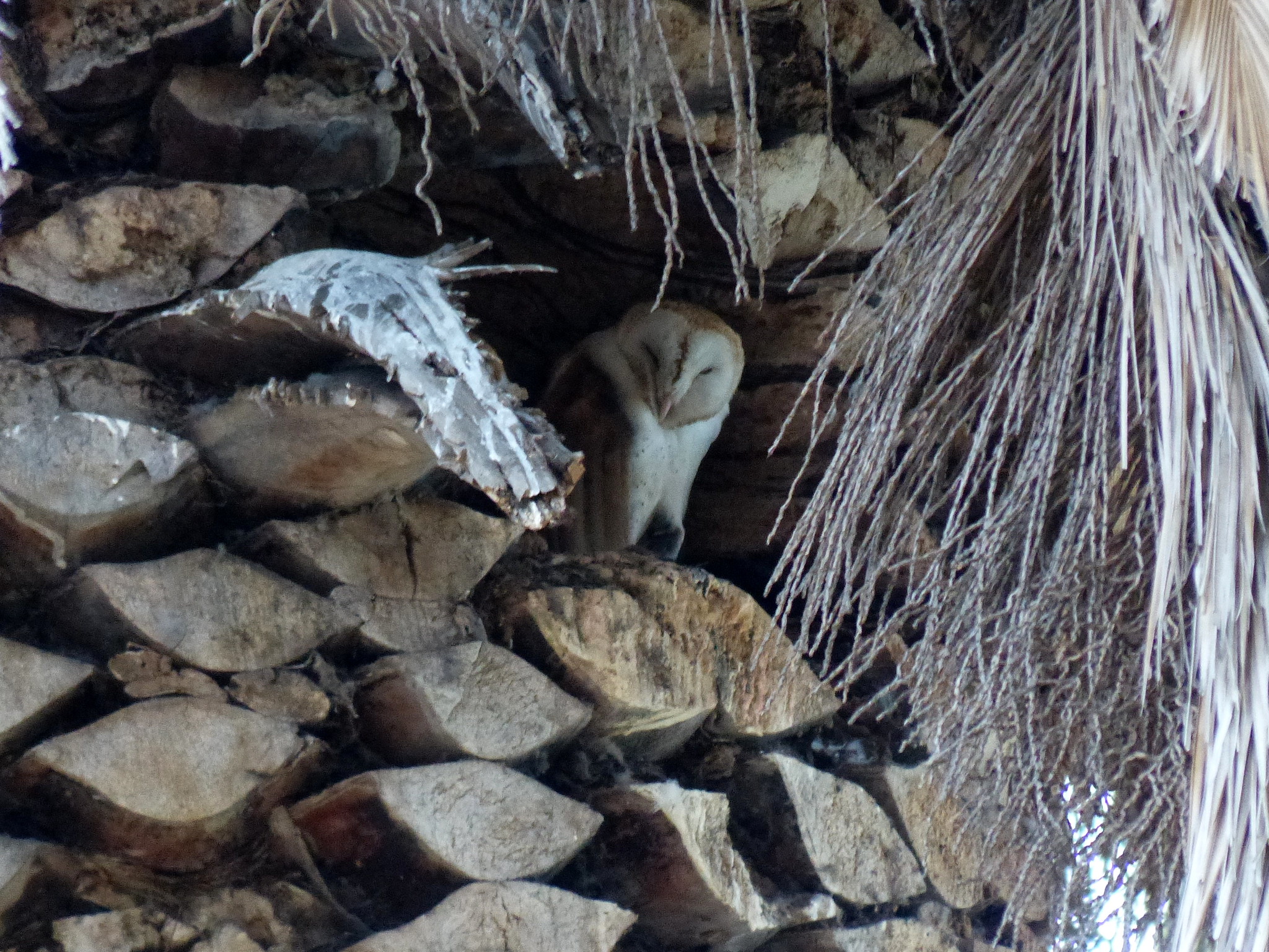 Two, in fact. They stood stock-still, blending in admirably. Do you think it is possible that we are walking right by owls all the time and aren’t noticing them? I am absolutely sure of it.

And do you think the tens of thousands driving down the freeway in go-go Silicon Valley think they’re passing through Bald Eagle habitat? Not many, I expect, but that just shows you how much your tech overlords know. Frankly, I didn’t quite believe it either when the Resident Expert reported seeing a Bald Eagle out the passenger window on 280, between Alpine and Page Mill Road. A White-tailed Kite, I suggested. But I keep hearing about the Bald Eagle on subsequent commutes. I have to pilot the vehicle, and am not able to get a good look at our National Animal. Saw plenty of Red-tails, Harriers, Turkey Vultures, and every other predator and carrion bird local to our area. The Bald Eagle has been staging a comeback around here recently, and it seems that every little reservoir has its own nesting pair of “not seen in 100 years” birds. But there’s no water around here that I know of, and they mostly eat fish.

“That I know of” is the qualifying phrase that you must keep in mind. In this case, there was much that I did not know. After our successful owling, we went scouting a good location (not the freeway) to look for Resident Expert’s eagle. I looked at Google Maps before-hand, and it showed a large tree farm just to the west of our Eagle’s favorite tree. But, being a Saturday, the tree farm was closed, so we could not explore further. To the south was some ranch land, also off limits. Eventually we stumbled across the Pearson-Arastradero Preserve, and from its trails we could see the Eagle Tree, which is a stark snag that looks like an outstretched hand (sort of). We did not seen the Resident Expert’s eagle, but did see tons of Kites, which don’t look anything like an eagle, except that they have a white head. 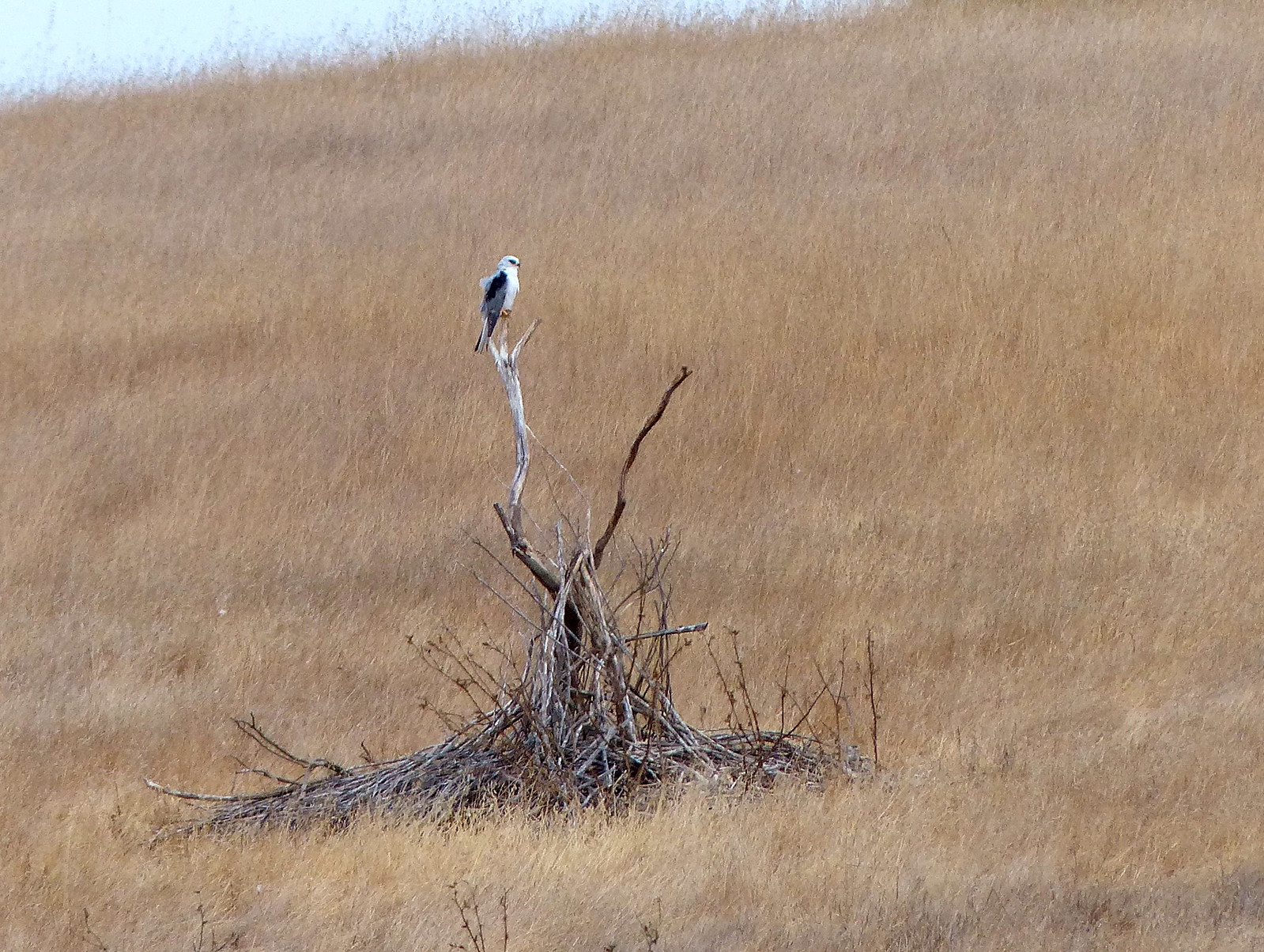 On the way back to the car, we chatted with a guide at the preserve who noticed we were birding a palm tree without any palm fronds on it. Again, not your most picturesque natural scene, but there was a bird on it, so. He said it was an Acorn Woodpecker, and they used these dead palm trees as granaries, and that the trees were killed in the “eucalyptus fire of 1987”. We nodded, as if we recalled this event quite vividly. But it was clear that he knew his stuff, and we had a nice conversation. Oh, and he mentioned that there was a family of Bald Eagles in the preserve. They fish from nearby Felt Lake, which I have never even heard of.

The Resident Expert handles total vindication quite gracefully, I must say. She refrained from saying, “See? I told you!”, or anything like that. I suppose that I could have been more supportive early on, with any indication at all that I thought it might be possible that she was seeing a Bald Eagle from the freeway on our morning commute. But I could not recall having done so. Oh well. The upcoming morning commutes just got a whole lot more interesting.